THE HUNT FOR 'SIDE A' 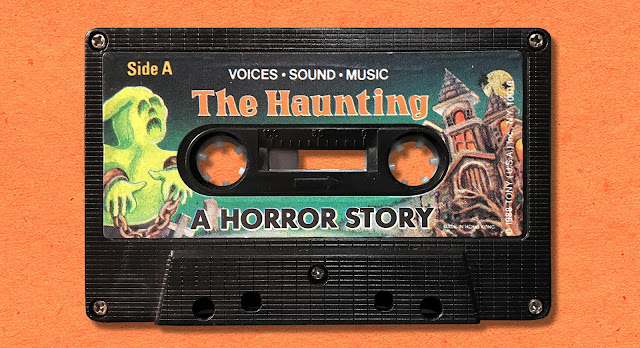 The photo above is the result of a three-year-long hunt that began when I was reviewing a series of vintage Halloween cassette tapes in 2017. The Chamber of Horrors by TONY (USA) has carved its spooky face into the Jack-O'-lantern of Halloween history thanks to its unique, 'decent into madness' approach to sound effects. (See my original review.) But the common release of the recording is literally only half the story.

Chamber of Horrors was originally the B-side to a more elaborate production called The Haunting: A Horror Story. The rarity of this edition, and the obscured "Side A" and "Side B" markings (see photo below) suggest that it was discontinued and reissued with the Chamber of Horrors sound effects repeated on both sides. Was it it simply too terrifying for young Halloween consumers, as some have suggested?

The elusive variant with its perfect ghost and haunted house artwork became the object of my obsession. My hunt didn't involve trips into the wilderness, or even the act of leaving the chair where I currently sit. However, it was an ebay adventure in perseverance and timing. I laid 'email search alert' traps, but the delay from inbox to web site amounted in two painfully lost auctions. I resorted to compulsively live searching whenever I found time. This went on for two years. It was ultimately a late night ebay visit where I, armed with a litany of generic search terms, found it in a nondescript lot, and finally "buy-it-now'd" my way to the grail. The joyous victory was intensely magnified by this year's harrowing months of uncertainty.

Now I share my delight with you. After years of being conspicuously absent from Youtube, I have uploaded the precious Side A. Please enjoy it and use it to help make yours the happiest possible Halloween!

Congrats on the win! Cameos by The House on Haunted Hill and a Rod Serling wannabe... Sketchy IP issues are part of the allure.

Thanks for your perseverence.

Great find! Thanks for sharing it

Your perseverance and dedication to Halloween preservation reaps benefits for all of us. I always wonder who the actors were and how much they were paid. I also still wonder why at 3:00 it sounds like someone in the background begins laughing and then vomits uncontrollably.

Great narrative. I had a very similar experience tracking down the original Canadian quadraphonic LP for thw wonderful animated short, The Selfish Giant, with vocals by The King's Singers. I managed to find it on ebay for $3 after years of fruitless searching. It was worth it! Thanks for the Halloween upload, sir.

Kirk,
It's nice to hear from you. I always look forward to your Halloween posts. Thanks.
Thom