THE DO’S AND DON’TS OF SELF-TITLED RECORD ALBUMS 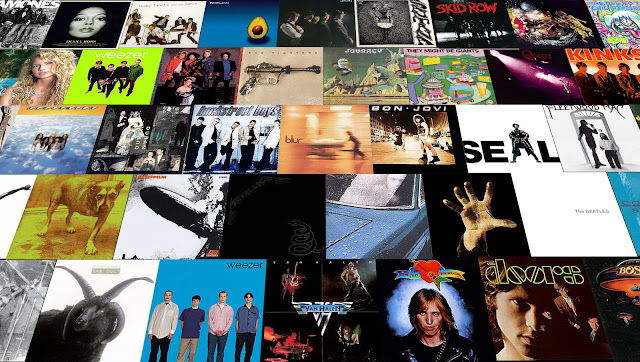 This article originally appeared on Monkey Goggles, a sadly defunct project from the gang at Archie McPhee.  Of all the things I've ever written, this is one of my favorites. So here it is, back on the internet where it belongs.

The Do’s and Don’ts of Self-Titled Record Albums

We humans have only been able to record our music for a hundred-something years, but in that short time we’ve arrived at some standard practices. For instance, recording artists sell bundles of 10 to 15 songs at a time, and these collections are called albums. Cover artwork and a title are carefully selected and assigned to each album; in many cases this happens well before the record is leaked online.

Likewise, certain conventions have emerged in the realm of album titles. Titles are usually a short phrase or a single word that corresponds with the theme or tone of the music. They can be poetic and profound, consider: Rubber Soul, Loveless, Urban Hymns or Nevermind. Some records are named after a song that appears on the LP; examples include Pet Sounds and Thriller. Others are simply named after music in general, such as Madonna’s album Music as well as Music, the first CD from the band 311.

Many artists have chosen to name albums after themselves; these are known as self-titled or eponymous records. R.E.M. actually called their 1988 singles compilation Eponymous, which was pretty cool. (Though it should be noted that The Alarm did this five years earlier, which deducts some of that coolness.)

At its best, the self-titled record is an act of elegant simplicity; at its worst, it becomes a baffling ordeal. Let’s explore the possible scenarios of self-titling with hopes that future bands might avoid pitfalls such as Santana Syndrome or Weezeritus.

THE SELF-TITLED DEBUT: DO

If you’re ever going to self-title, then your first album is the perfect time to do it. It makes an efficient, dignified statement: This is us and this is our music. The eponymous debut album is a respectable move that will place an artist alongside some of the most influential musicians in history. The seemingly endless list of acts who have carried on this rich tradition includes Wilson Phillips, The Rolling Stones, Led Zeppelin, Bob Dylan, David Bowie, The Doors, Rush, Black Sabbath, Van Halen, Kraftwerk, Queen, Red Hot Chili Peppers, Aerosmith, The Clash, The Smiths, The Eagles, The Cars, Duran Duran, Journey, The Ramones, The Stooges, Violent Femmes, Madonna and “Weird Al” Yankovic to name just a handful. (Sorry, I really cracked myself up starting that list off with Wilson Phillips.)

The only act who has ever made a mistake in releasing a self-titled debut is Hoobastank. That name should have been avoided entirely.

Groups like Huey Lewis and the News and the The Allman Brothers already took the easy road when they named their band, so a first album title with a little pizzazz would have been nice. (Granted, Huey gets some credit for making up a stage name; he was born Hugh Anthony Cregg III.)

THE SELF-TITLED ALBUM THAT’S LATE IN THE CAREER: USUALLY A DON’T

Why wait until the third, eighth, or twelfth album to go eponymous? Sometimes it’s meant to indicate reinvention, like when Heart transitioned to a more pop oriented sound on their album Heart. Other times it proclaims the end of artistic integrity, as is the case of Metallica’s fifth album Metallica.

Bands deserve a pass if there is a legitimate reason behind the decision. Take The Beatles, the ninth LP by The Beatles. The record was to be named A Doll’s House until a British group called Family released the similarly titled Music in a Doll’s House

. Despite this effort, many listeners still struggle to tell the two bands apart.

Smash Mouth held an online contest inviting their fans to name their third album. Their followers managed to come up with the winning appellation: Smash Mouth. The disgrace was completed by the fact that more people named the album than actually bought it.

The stupidest possible time to self-title is on the second album. (Unless it’s the first release in the States, i.e. Elton John.) It gives the impression that all creativity has been depleted by round two. Prince did it, and so did Collective Soul. What a bunch of goobers.

This practice doesn’t necessarily mean that a band has declared creative bankruptcy; The Velvet Underground, ABBA, and The Carpenters all did it on third albums which weren’t too shabby. But there’s really no method to this practice. Kid Rock went eponymous on his fourth release, Echo & The Bunnymen on their fifth, and The Cult waited until their sixth. Wilco’s seventh album is called Wilco (the album). The Cure held out until album 12 for some reason, and The Beach Boys self-titled their 22nd and final studio album as if to announce that they had officially hit the bottom of the artistic barrel.

A shocking number of recording artists have decided to put out more than one, and in many cases several, self-titled albums. Fleetwood Mac, Diana Ross, Duran Duran, Cher and Cheap Trick are all guilty. Whether their intentions were rooted in profound artistic statement or just plain apathy, it causes grief among the fans. It makes it confusing to discuss an artist’s career and it can even make it tricky to buy their albums. The worst offenders are Seal and Weezer, each with three self-titleds apiece, and then there’s Peter Gabriel, who didn’t bother naming his first four records.

A word of warning to any artist considering mid-career and/or multiple eponymy: fans just won’t put up with that crap. Listeners refuse to go to the trouble of calling a CD “Metallica’s self-titled fifth album” and rightfully so. They avoid this rigmarole by collectively assigning their own title, like “The Black Album.” Trouble is, the public will look to the most obvious visual cues available for inspiration, and the results are predictably dull. An album’s color, for example, is a no-brainer. It started with The White Album and continued with unsanctioned names like They Might Be Giants’ Pink album, Collective Soul’s Blue album and Weezer’s Blue, Green, and Red albums.

If colors aren’t an option, then fans will go with a prominent object on the cover. When Pearl Jam didn’t come up with anything better than Pearl Jam for their eighth effort, the fans looked to the inexplicable chopped avocado featured on the cover. Voila! The Avocado album. The Cult wanted to get back to basics with a self-titled sixth album — title overruled! The Black Sheep record was also renamed for its cover art. And in what is perhaps the only clever instance of this phenomenon, the self-titled Alice In Chains was nicknamed Tripod based on a three-legged dog on its jacket.

Fans used the same technique to deal with the Peter Gabriel debacle. The cover photo on his debut shows Peter in a car. It became Car. Peter’s fingers appear to leave scratch marks on his second album cover. This became Scratch. Can you guess what they named the one where half of Mr. Gabriel’s face is melting? Mr. Melty Face? No, just Melt.

By album number four, the powers that be were through screwing around and released the record with a sticker on its cover that said Security. Gabriel seemed to take the hint and started naming his records. His lack of album-naming practice was evident in the fact that his subsequent three records were respectively named So, Us, and Up.

Some artists like Chicago, Scott Walker, and Led Zeppelin put out multiple self-titled LPs, but they had the courtesy to number them. Seal forced his appreciators to do this, and he further convoluted the situation by giving his third record a proper name. So his unofficial discography goes: Seal I, Seal II, Human Being, Seal IV and so on. It sounds like a horror movie franchise.

Fan-named titles have also spawned from year of release (Cheap Trick ’97) and song names (Genesis, the Mama album). The point is, if you don’t name your album then everyone else will, and you’re not going to like it.

It’s true: Santana released Santana in 1969 and Santana in 1971 (which was the band’s third album, no less), proving that Carlos Santana is the laziest rock star in history.

The Do's and Don'ts of Blogging
#1 Don't disappear for nearly a year and then post some recycled content!
Ha! Just kidding. Fun read and good to see any content back on your blog. Any trip plans this year? I always enjoy your vacation destinations.

Actually, I remember friends in college who thought it was cool and avant-garde for Gabriel not to commercialize his albums with wonky titles. A different perspective for you.

Kirk - Glad to see you post again! For some reason, if you google the secret fun spot, all you get is a black screen with a Flash download button. I thought you might've abandoned the site and deleted the content, but then I found that the links in your tweets still work and you can access the rest of the site that way.

I'm not sure what the problem is, but I thought you'd want to know that your blog might not be getting much google traffic these days. Hopefully it can be fixed so more people can learn the wonders of fake vomit, tourist schlock, movie family portraits and all things peg board.

Thanks Tom!
I've taken some great trips, though blogging has obviously moved to the back burner. Perhaps I can post again someday!