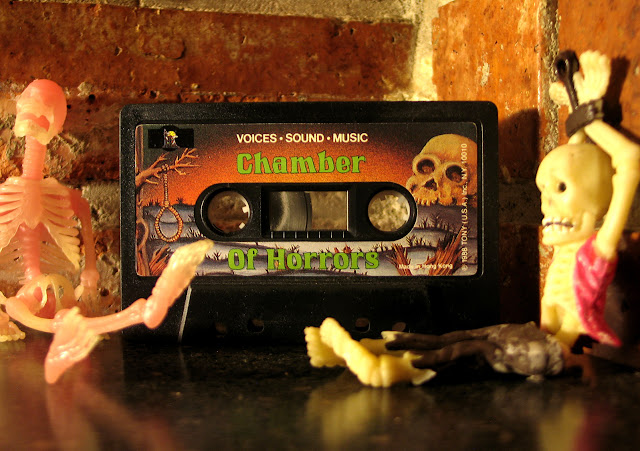 Title: Chamber of Horrors
Manufacturer: Tony (U.S.A.) Inc.
Year: 1988
Total Runtime: 45 Min
Repeats on both sides: Yes (but not on the earliest version)
Stories: No
Music: It kicks off with a familiar pop song. Then the jazz fusion takes over.
Narration: No (but there is on the earliest version)
Distinct Audio: A man who sounds like he lacks personal boundaries yells “Happy Halloween!” many times.
Review: Chamber of Horrors leaves behind the gasps and growls of Halloween tradition. Instead it hurls a jumbled audio assault on the listener. It’s impossible to determine whether this approach is an act of apathy, or if it’s a brilliant take on the psychological horror genre. Either way it makes you feel like your brain is dripping from your ear holes.

The bulk of the audio came from other sources. There’s a good chance it was stolen, because I’m going to assume that very few lawyers were involved in the making of this this tape. Other than the “Happy Halloween!” voice over, there are three components repeated on the record. The first is a short, instrumental sound-alike of Michael Jackson’s “Thriller.” Playing on top of that is a sequence from the popular Horrible Sounds of Halloween album. Lastly, and this is the real head-scratcher, they use a huge chunk of the 1973 song ‘Firebird/Birds Of Fire’ by Jazz artist Don Sebesky. This is not just a standard jazz ditty. It’s a bird themed medley that mashes up a clip from Igor Stravinsky’s 1920 ballet ‘Firebird’ with a jazz rock cover of the song 'Birds of Fire,' originally performed by Mahavishnu Orchestra. (That single sentence represents over two hours of research.)
The end result is a flat out freakout.

The continual stream of Ebay listings suggest that this was a very popular tape. Or maybe it wasn’t popular at all considering most of them are still sealed in their original packages thirty years later. There is a variation of this album that’s super rare. The only evidence of its existence that I’ve seen is a seven year old post by a user named SIYS on a Halloween forum. The variant has an alternate "side A" called “The Haunting: A Horror Story.”

The track is a narrated audio tour of different horrible places. It reminds me of side one of Spooky Tales and Scary Sounds, but the musical score gives it a greater sense of urgency. According to a lone comment on a deleted YouTube video, "The Haunting" proved too scary for kids and was removed. (This follows in the great tradition of “too scary” legends like the Hatbox Ghost, and the un-finishable haunted house.) Two years later Tony (U.S.A.) Inc. released a completely different cassette with the exact same title because they wanted to make life a baffling ordeal.

My only criticism is that Chamber of Horrors is so incoherent that it doesn't naturally feel like Halloween. So last Halloween I remedied this by blaring it out my window all evening, forcing a Pavlovian association between the tape and the holiday. I suggest you do the same.

Rating: 4 of 5
(For more Chamber of Horrors thoughts and discussion, see the 2014 post on Dinosaur Dracula.) 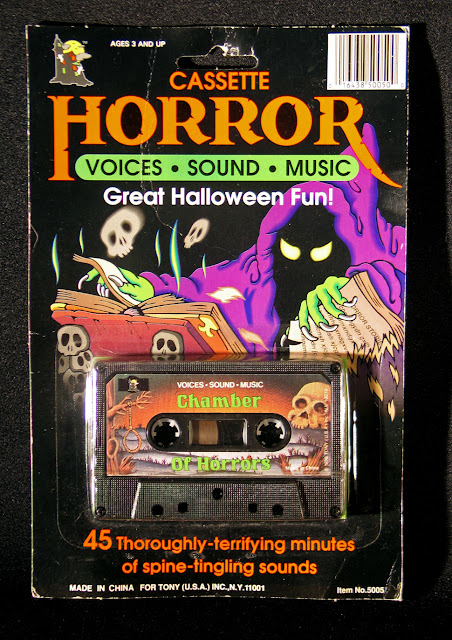 The most common of the various types of packaging for Chamber of Horrors
Posted by Kirk D. at 6:32 PM

Just in case you wanted to know, the "Thriller/Chiller" sound effects in this one, actually weren't a rip off...here's something reaaaaaally "in depth" for you to view...I had a HUGE post at HalloweenForum, that covered this tape and so much more. The "Thriller/Chiller" sounds were bootlegged from a cassette called "Scary Cassette : Sons Affreux" which was a bootleg of another Tony USA classic (which is the same company that made "Chamber of Horrors") called "Horrible Sounds of Halloween"...in other words, if you want to hear this tape without the Jazz, Thriller, or the "Happy HALLOWEEEEEEEN!" This version completes it. https://soundcloud.com/jeffjvn/horrible-sounds-of-halloween-side-b (especially if you want to hear the Thriller/Chiller tape without it sounding like a tin can in an empty hallway)

Nostalgiakidd-
Thanks for the great info! I have the "Horrible Sounds of Halloween" ready for an upcoming review and I figured Thriller/Chiller used it as a source, but didn't know about the Sons Affreux connection (though I have seen that one around). I also didn't know that Tony was behind Horrible Sounds.
I have another Horrible Sounds tape with green text that is nearly identical to a tape called "Halloween Sounds of Horror" with a grim reaper face on it. Know anything about that one?

If I ever spend any time floating in a sensory deprivation chamber, I would like to listen to this cassette while I'm in there. But that's just me. The jazz gives it a bit of a "Mannix" feel. Love that.