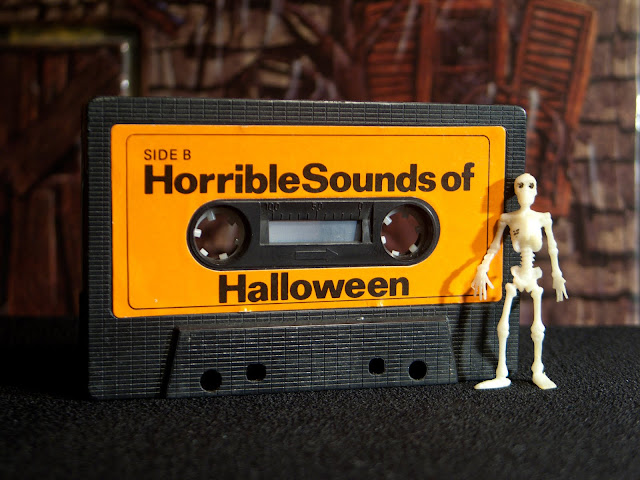 Title: Horrible Sounds of Halloween (Black letter variant)
Manufacturer: Tony (U.S.A.) Inc.
Year: 1988
Total Runtime: 30 Min
Repeats on both sides: Yes (and it repeats over four times on each side)
Stories: No
Music: Funeral march
Narration: No
Distinct Audio: See below
Review: Like a recurring nightmare, or an unrelenting stalker, or the monster at the end of the horror movie, this collection of effects keeps coming back. From what I gather, the recording on Horrible Sounds of Halloween was not only sampled on Chamber of Horrors, it was bootlegged for Scary Cassette: Sons Affreux and stolen again for Thriller/Chiller Sound Effects. (Thanks for the info Nostalgiakidd125.)

The redeeming factor is that Horrible Sounds is the source material— the mother lode from which the other cassettes were spawned. (I'm referring to the sequence of effects. The individual sounds date back to the 1974's Halloween Horrors.)

Having listened to this sequence about four dozen times this month, it is now obvious to me what’s going on. It’s a story of revenge. Use the audio link at the end of this post to listen along as I explain...

On a dark, dark night the wind grumbled as a storm took over the sparsely populated township. The sounds of the night were momentarily pierced by maniacal laughter coming from a small cabin at the edge of the woods. A man— a killer, with rain-soaked hair sat by the fireplace, gleefully recounting the atrocity he had just committed.

The wildlife was restless, but it wasn't the storm, or the killer's outburst that put the animals on edge— it was the witch. She followed her black cat through the open window at the back of the man's cabin, crushing the tip of her cone-shaped hat in the process. Standing behind the murderer, the witch surprised him with a shrill cackle. He whipped around, but before he could strike, her spell took effect and his innards felt ablaze. His guard dogs, unfortunate for him, were still chained to his shed. The howls of both beast and master meshed indistinguishably in the cold air.

The victorious witch slowly forced open the rotting front door with the aid of an unseen evil. She screeched with emotion as images from earlier that night flashed in her tormented mind: the joyous new litter of black kittens....hours later, the evidence of an intruder in her cave.... a found bucket of rat poison.... and the most ghastly discovery— the furry black stillness that surrounded her whining mama cat.

The murderer's funeral procession saw no mourners, rightfully so. The burial was to be the responsibility of the shell-shocked mortician who steered the horse-drawn hearse, and his moronic, torch-bearing assistant who guided them through the fog. There was nobody to notice the moaning spirit of the recently deceased exiting through the walls of the casket, and then the carriage. This ghost found a new home in the nearest available body. The assistant doubled over in pain, dropping his torch as he lost his free will. Nearby wolves echoed his snarls of agony. The ghost, now in full control of his new vessel, turned his attention to the mortician. He laughed at his newfound strength as he put a painful end to the witness.

Back at the witch's cave a cauldron simmered unattended. The possessed man had entered undetected, but as his giddy anticipation grew, so did his breathing. The sound of his fiendish excitement revealed his presence. For the second time that night he felt the ire of the witch. From the shadows she had pierced his body with a tree branch covered in otherworldly thorns. He might have escaped with his life were it not for the empty bucket that tangled his feet, ensuring his second death. As he lay gasping on the stone floor, he heard the impossible sound of a big city ambulance coming to his rescue. Alas, it was an auditory manifestation of the searing, supernatural pain that enveloped him.

As the witch dragged the fresh body back out into the storm the mama cat called out to her, paralyzed by a feeling of unexplained fear. Her master continued out of earshot as the cat called, and called, and called.
"Boo!" said the ghost of the murderer.

For some reason I feel compelled to list out all of the elements found on this brief, yet seminal recording. (The names are my own as opposed to their official titles on the track listing of Halloween Horrors.) They appear as follows... 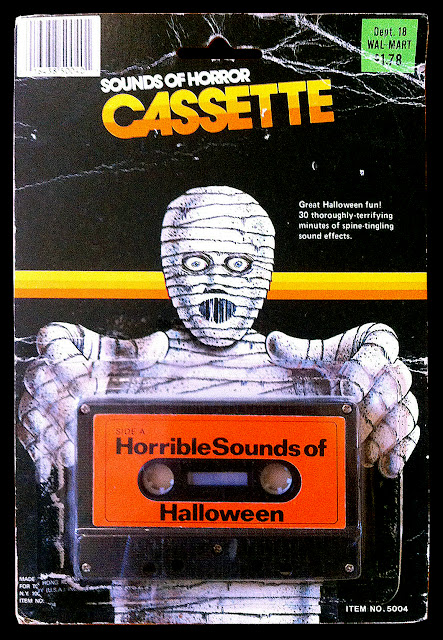 To be fair, I had been looking for this cassette for a LONG TIME...as the Sons Affreux version was used at a haunted castle attraction at a local flower shop from my childhood...so as cheesy and 2/5 deserving it is, it holds a very sentimental place in my heart! I love your story, and the review was twice as good!

Now we'll lay this tale to rest...(until at least, I re-edit this tape to finally have Sons Affreux/Thriller Chiller in High Quality!)

By the way, just in case you were interested, This is the original packaging for HSOH http://www.halloweenforum.com/attachments/halloween-music/274649d1456644584-elusive-highly-sought-after-effects-cassette-least-far-i-know-44c70b7d363289ac59b25b04c56d208f.jpg

And this is the packaging for Sons Affreux
http://www.halloweenforum.com/attachments/halloween-music/274341d1456203180-elusive-highly-sought-after-effects-cassette-least-far-i-know-_57.jpg (in fact, the only picture online of that is the one I bought!)

Here's the stereo rip of Sons Affreux btw, just in case you want to hear the same effects ANOTHER TIME. XD

Thanks for the credit by the way! It was much appreciated!
https://soundcloud.com/nostalgiakidd/scary-cassette-sons-affreux

Oh, yes, I read your years-long quest to find the tape on the Halloween forum. It made me feel guilty for having a copy sitting out in my garage all this time. I got mine back in the day and I'm pretty sure it had the mummy packaging you linked to. (which I may go ahead and add to the post) I do know mine came from Wal-Mart, back when it had a hyphen in the name.

Yes, this probably deserves a higher rating considering how influential it is, but it's hard to excuse such a repetitive, low effort, borrowed-material release. This is my cold-served revenge for my initial disappointment. It makes one wonder why they didn't just swipe all the effects from Halloween Horrors.
Anyway, thanks again for all the info!

Hey, not sure if you knew it or not, but right when you first started these reviews, I made a thread in the Halloween forum about it. Click the URL link by my name to view it. Awesome reviews!

itzmurda- Thanks for doing that! I'm glad this stuff is being seen by true aficionados. I really should just join the Halloween forum. Goodness knows I've spent enough time lurking.

Oh, wow. What a total blast from the past. I had this tape as a kid and I listened to it over and over. I spent a lot of time poring through all these updated versions of the tape online, but then I finally found this. My childhood has come flooding back -- thank you for taking the time to do this. Definitely using this as the closing track in this year's Halloween playlist.