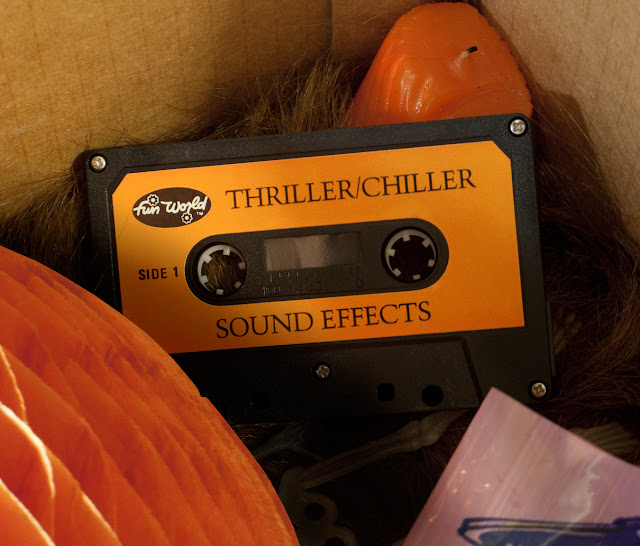 Title: Thriller/Chiller Sound Effects
Manufacturer: Fun World
Year: 1988
Total Runtime: 45 min
Repeats on both sides: Yes (and then some)
Stories: No
Music: Funeral march repeats multiple times
Narration: No
Distinct Audio: An innocent sounding cat meows several times followed by someone yelling “Boo!” There’s also a recurring ambulance siren.
Review: This tape was everywhere. I own four copies, though I only bought one of them on purpose. In the late 1980s a Faustian deal was struck with the biggest retail chains in the country. As a result, a Legion of these cassettes were produced and shoveled into stores across the nation. The upside to this is that Thriller/Chiller Sound Effects now stands as a great unifier among Halloween lovers. Sadly, it’s a low effort release by almost any standard.


When it comes to sound fidelity, Thriller/Chiller manages to sound both muffled and shrill. It’s like the audio is coming from a metal raccoon trap that’s buried under a pile of blankets. It warbles and reverberates like it’s a third or fourth generation dub. (I suppose it could be argued that the distorted qualities are welcome on a scary record.) But it’s unforgivable crime is that the tape consists of a single four minute track repeated over and over and over. Not only does it loop, the loops are out of sync. Eventually you hear the same track carelessly piled on top of itself three or four times, creating an echo chamber of buyer’s remorse.


The title is a cheap grab at the seminal, best-selling Halloween recording, Disney’s Thrilling Chilling Sounds of the Haunted House. I’m guessing it was a plot to get buyers to confuse the two. Fun World unleashed even more confusion when they used the same title for an entirely different album. To further complicate things, most of Thriller/Chiller’s effects also show up on a tape called Chamber of Horrors.


The cassette itself is made from the cheapest possible materials. There’s no plastic case, or illustration. The stickers fall off. Yet despite all its shortcomings, for many people this is the quintessential Halloween sound effects album because this is the one they bought— because it was everywhere.
Rating: 1 of 5

I had a "version" of this one too. The "meow...meow...meow...BOO!! HA HA HAHA!! Was always hilarious to me. I used to do an impression of it, which I'm sure entertained my whole family. I also used to get a kick out of the guy that sounds like he's vomiting. This loop sounds like total chaos. Good times and great Halloween oldies!

I always imagined one of those jerk ghosts from Casper doing the cat booing. Ah, yes, the vomit guy is great too. I like to think that he's vomiting blood.

CAN ANYONE TELL ME MORE INFO ABOUT THIS CASSETTES.
I HAVE ONE THAT IVE USED ALL MY LIFE AND LOVED IT BECAUSE OF THESE SPECIFIC SOUNDS BUT WHAT STANDS OUT THE MOST WAS THE MASH UP WITH MICHAEL JACKSON'S THRILLER WITH A REALLY CATCHY JAZZ SEGMENT. I WANT O FIND A RESTORED VERSION AND I WANT TO BUY IT. PLEASE ANYONE HELP.