Remember the year 2006? Gas was merely three dollars a gallon, James Blunt told us we were beautiful, YouTube existed independent of Google, and there was only one Pirates of the Caribbean sequel. The world was naive and innocent, the perfect time for a bright-eyed, retro-headed webmaster to proudly proclaim "I'm going to add a blog to my web site!"
Friend...that webmaster was me.

I'm not sure why I picked the most beautiful month of the year to delve into this neverending project, but two years ago today I published my first two posts. So in honor of this mediocre milestone I decided to sort through my 222 posts and apply a new "Best of Secret Fun Blog" label to the most popular entries as well as my personal favorites. Please allow me to outline some of my picks... 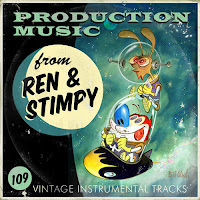 Ren & Stimpy Production Music
Easily my most popular post of all time, and rightfully so. I found a ton of authentic mid-century production music that was used on Ren and Stimpy mysteriously gathered and tucked away on the web. So I designed a cover for it and redistributed the whole collection. Incidentally, if you're one of the folks who went gaga for this, then you might want to visit again in a few weeks.

My Life in Frosting
In which I assembled photos of every birthday cake my mother made for me from ages 1 through 14. This post also tops the charts traffic-wise, it's received more international attention than any of my other pieces, and it's even fueled political unrest.

The Phantasmagoria
I learned the true power and joys of blogging when a simple post caused one of my lifelong dreams to come true. When I learned that my favorite dark ride was being torn down I lamented its demise with a hearty retrospective in which I spoke of a failed attempt to personally paint its exterior. Gracious park employee Buddy Stefanoff offered to give me an exclusive walking tour of the ride's interior. This incredible day begat one of my most wonderful entries, Secrets of the Phantasmagoria, which was eventually followed up with Phantasmagoria: Revelations. Thanks again Robbie, Buddy and Kyle. 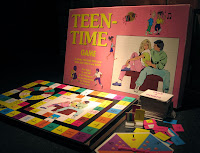 Teen Time
Now here's a post that truly deserves a second chance. It's one of my personal favorites and I laugh uncontrollably every time I reread it. Teen Time is a garage sale find that proved to be one of the most ludicrous board games ever conceived. It was mentioned on a couple of keen-eyed blogs, but I feel that it merits another wave of mockery.

I've noticed that road trips can make for good blogging. Here are a few fun ones...
Then there's my Skeleton countdown and my 2007 Halloween Countdown which were both very well received.

When it comes to personal nostalgia, I'm particularly fond of these...
And about a dozen more faves can be found using the new Best of... label.

I am thankful to all of you who have read, commented, contributed, encouraged, shared, linked to, or spammed the Secret Fun sites. I've greatly enjoyed both entertaining and getting to know you, and I look forward to many more years of secret fun (seasoned with lengthy periods of complete inactivity).
Posted by Kirk D. at 12:01 AM

Congratulations, Kirk! Your blog and site are among the very best.

Happy Blog Birthday to one of the best blogs in the blogosphere!

Happy Birthday 2 you. Congrats Kirk. I was looking at the Woolworth's post & the Ronco record...
I've got a trio of K-Tel records: Looney Tunes, Dumb Ditties and Wacky Westerns that I'm planning on posting - as soon as I can get a good image of each album cover & as soon as I come up with some clever commentary that doesn't make me sound like a Kirk D. wannabe (which, I wanna be).

Thanks for the memories.

Congrats on the big 2! You're now probably considered one of the elder statesmen of the blog-o-sphere.

Love your blog and your sense of style. My only gripe is that you don't post daily! I need more ways to waste time here at my so called "creative" job.

Happy Birthday, Kirk! I've gotten a lot of enjoyment from your blog, your website, and your movie, these past couple of years, and look forward to spending some of the future here as well.

thats funny found you because of that Ren and Stimpy music post.

Congrats on 2 years of greatness. Thanks for mentioning the skeleton countdown... which I've read and re-read over and over again. Personal favourite - # 20 - Would you like a skeleton to go with that pile of linking rings?
Cracks me up every time! Your blog is my favourite website of all time. Well done, Kirk!

Now get back to work!

Thanks all for your kind words. I would have lost steam a long time ago were it not for you folks.

ernie- yes its funny how there was a virtual blog rush in 06 and how so many of them have stalled. I can't blame folks, forever is such a long time.

mr. balihai- ha, thanks for the prodding. Just added a post and I've got some great ones coming up.

Here is to another Two !