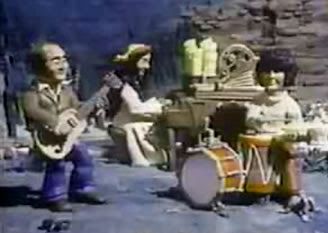 On balmy summer Saturday nights (just like this one) when I was eleven years old there was nothing better than 10 PM reruns of Doctor Who on AETN, the local PBS channel. My father and I kept the sound turned low so as not to wake my mom and sister. Dad usually lasted about half an episode before he carried his empty ice cream bowl to the kitchen sink and turned in, but I stayed awake until each cliffhanging conclusion. The shows plodding pace and British accents had a soothing effect on me. The song of the cicadas outside my sliding glass doors often competed with the dialogue but this only enhanced the show.

One night both my dad and I stayed captivated until the end credits. When the screen went black we sat silently and awaited that week's installment of Star Hustler which was a five-minute astronomy show that offered up-to-the-week info on viewable constellations and astrological phenomena. But to our surprise something very different appeared on the screen. We found ourselves watching a scenic clay-animated landscape that eventually turned into a bizarre yet brilliant eight-minute short film. The featurette focused on a three piece folk-rock band that played to a forest full of wildlife. I won't spoil it, but I will say that the ending was a real brain blaster for me and I've never forgotten this mysterious and wonderful little production. I've been trying to describe it to friends for more than two decades, but it's one of those things that only generates looks of confusion.

Last week wasn't the first time I've searched the web for info on this gem, but it was the first time my efforts bore any fruit. To my pure delight I found the entire thing on that wonder of the web, YouTube (of course). [UPDATE: I just re-upped it to Google Video] So here it is...

It's called Mountain Music and it was part of the 1975 movie The Fantastic Animation Festival. Turns out the genius behind it is Will Vinton, the same guy responsible for the California Raisins. It's funny, all these years I thought it was a propaganda piece about pollution, but as I watch it now I interpret it as a cautionary tale about man's self centeredness and disregard for the planet. Maybe. Regardless, this thing really resonated with me. The fact that it came entirely unannounced and unexplained gave it an otherworldly aura of mystery. I was already ga-ga over anything animated, but none of my Saturday morning cartoons ever came close to such an apocalyptic outcome, so this was easily the most weighty piece of animation I'd ever seen. It came in a kid-friendly package but was creepy and decidedly adult. No wonder I was purely fascinated. Now that I think of it, it stirred up the same feelings as the cover of that Queen album News of the World. But anyway, there it is. Another personal holy grail of childhood served up by the web. I just had to share. And while I'm at it, here's the magical opening credits of Tom Baker era Doctor Who...

and I'll even throw in the Star Hustler Theme.

But the best part of those deep summer nights happened after the patriotic station identification and after channel 13 turned to snow. That's when I walked out onto the back porch and the bugs got even louder. There I laid on the grass and gazed into the heavens and tried to see what Jack Horkheimer, the hustler of stars, had been gabbing about. So if you'll excuse me, I think the night is calling.
Posted by Kirk D. at 12:31 AM

Jack is still hustling stars... they just had to change the name because something else was coming up on the search engines when the word "hustler" was used.

I do miss Tom Baker as Dr. Who.

Great find. I've got 4 things for you:

1. Yup, Jack is still closing out PBS broadcasting on most nights.

2. The old PBS bumper logos from the 70's and 80's were pretty creepy in their own right; the multi-layered faces actually looked a bit like the iron giant on that Queen album cover.

3. I had a similar experience with PBS in 1992. Only, instead of an eerie claymation video, I was accidentally treated to the only legal re-broadcast of The Titicut Follies in television history. As you can imagine, this bruised my 10-year-old mind to no end.

4. Speaking of Dr. Who and childhood television memories and whatnot, did you ever see the Max Headroom Pirating Incident? You'd dig it the most. To this day, I'm still intrigued by this mystery to no end.

That star Hustler theme is forever burned on my brain! Not only do I remember watching it, but in high school, my astronomy teacher played them in class! Thanks, Kirk- your blog is...salubrious (another tidbit from high school).

thanks grantbob, I just watched the latest episode! Ah, St. Lawrence's tears, nice and creepy. I am so subscribing to his podcast!

cdp- I am already in love with those old PBS bumpers that were based on the life story of the stone giant on the Queen album.

Jiminy! This Titicut Follies is straight from the Lake of Fire! I must investigate. You are ruined.

I've heard about the Max Headroom thing and it sounds totally hair raising. Reminds me of a ripley's type fact I saw when I was a kid that said that a human hand once appeared on someone's TV set... while it was unplugged! You gotta love creepy television stuff. No wonder I love Poltergeist so much.

Travis, I'm glad to hear that the site is conducive or favorable to health or well-being. (OK, I looked it up)

Wow cdp. Thanks for mentioning the Max Headroom pirating incident and the link. Wikipedia actually links to a video of it at Chicago's Museum of Broadcast TV site. I just took a look at it and I've gotta say, it was realllly eerie to see that again! Yep, I was a teenager watching wide-eyed that night when the Dr. Who broadcast was unceremoniously interrupted. I'm not sure what amazed me more ~ that it actually happened, or that it was such big news the next day.

Great post, and I loved the Star Hustler theme as well. Actually, it isn't Dr Who (at least it wasn't while I was watching in the early 90s), but "Arabesque No. 1" from Isao Tomita's album "Snowflakes Are Dancing".

Thanks Paul. If you click on the link the Tomita track is the one I have there. I just posted the Doctor Who intro before it because Star Hustler aired right after that show.
Thanks for reading!