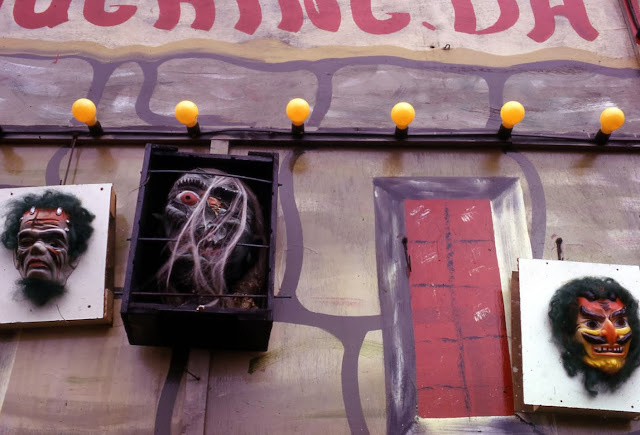 Thanks to my ongoing efforts to gain pleasure by looking at old dark ride facades, I recently discovered the National Fairground Archive of the University of Sheffield. Their collection of old carnival images is literally overwhelming. It's so overloaded with enjoyable images that I've actually found myself wishing that I could arrive at the end because it's just too much to take in. Though I have yet to explore the entirety of this mother lode of carnival eye candy, I'd like to go ahead and share some of my favorite dark ride photographs.  Please enjoy (in moderation)...

Email ThisBlogThis!Share to TwitterShare to FacebookShare to Pinterest
Labels: Spooky

Wow, that's spectacular! One thing I love about these rides are the "off" model drawings. Drawings obviously lifted from another usually copyrighted source but drawn slightly strange due to the artist's skill level.

Then there are rides like "Outer Limits" which seem to be grab bags. "I like drawing sexy women, pop-art guys with guitars, and space monsters. What job could I get?"

That giant skeleton in Blackpool Pleasure Beach is calling my name. It wants to be with me, draped over my house.

I completely agree Brian, looking at the art is like playing a game of "guess the source material." It's fun to see such a mix that will do anything to grab attention.
And yes, that skeleton is amazing.

I like the diversity of the façade artwork.Along with the classic images we've come to expect,there's also glimpses of Gorgo,Kong,robots,Darth Vader(or a reasonable facsimile)and a sinister octopus!It's a big spooky melting pot,and I say the more the merrier!

I am getting a flashback to a VERY disappointing carnival experience.

Northern New Jersey, early 1970s. I was staying with my aunt and uncle and cousins for a week. One afternoon we went to a parking-lot carnival. ("Fun fair.")

At the end of the lot was a trailer-based gallery-of-horror type attraction. It was two stories high! Not just a tall facade, but a second story. We could see through the windows up there that kids were spinning around, then descending down a slide. And there were horrors! World's famous monsters or something.

Entrance cost $.50, which was very steep back then. The booth had a prominent "No Refunds" sign.

Walk up stairs to "porch" on the level of the first floor. Ascend stairs to second level.

Second level was empty except for a small metal turn-table with metal handles. Like a miniature standing playground merry-go-round. You stood on the platform and kicked to make yourself spin around.

Through the door was a dark, L-shaped room. Lined up on one side were booths containing plaster busts, under red lights, of Dracula, Frankenstein's monster, and a few others.

And that was it! You left this closet and found yourself on the porch by the stairs down.

What an amazing rip-off.

Hauntedheadful- I agree the more the merrier!

Stephan- thanks for the memory. A perfect expectation vs. reality tale!

Great update. Have I already said that if you're in Amarillo you have to hit the Fantastic Journey at Wonderland Park? It's an amazing dark ride.

If you'd like to see thye INSIDE of theses rides…
http://mitchoconnell.blogspot.com/2011/11/unseen-secret-inside-carnival-rides.html

I went on the Palace Pier (I'm fairly sure it wasn't the West Pier) Ghost Train circa 1973/4. The siren went off, I shut my eyes and was about to open them when a piece of material brushed my head. It was all I could do not to lose control of my bladder, yet all the grown-ups were laughing... I LOVE funfairs. It's the lights, the smells, the atmosphere... I lived on Shoreham Beach as a kid and sometime around 1975 I looked out of my bedroom window to see some weird lights. Mum realised it was the funfair on the green nr the Norfolk Bridge and - amazingly - got me to dress (over my jimmies) and took me. I won a rubber monkey that I kept for many years and it was one of the best experiences I'd had. I still love these places... love the blog and will bookmark it.

Mark-
Those are fantastic memories, and well put at that. Thanks for sharing!

I've always loved the local travelling fair, the Hoppings at Newcastle town Moor and god the sight of some of these rides! I can vividly remember the Horror express being there and btw, the Outer limits may be a 'Dark ride' but it's in no way a haunted house or ghost train ride! Also I've been looking for one particular ghost train which was called "The journey to Mars"
if anybody has a shot? My dad took me on that when I was about three and I screamed my head off! Swine wanted to take me straight back on but I kept pulling away. Nowadays there are only two trains at the Hoppings and are both pretty lame by the standards of the '70s and '80s.

Thanks for sharing unknown!
I've seen photos of a Journey to Mars facade, so I know they're out in cyberspace somewhere.

Has anyone got any pictures of patsy grays old Ghost Train? Please