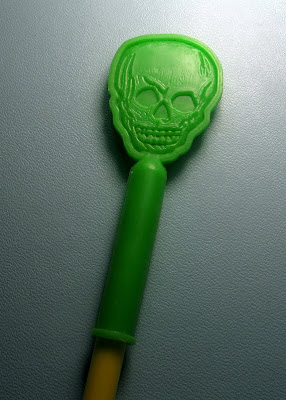 I remember my dad showing up in the doorway of my bedroom one afternoon with this plastic skull-lidded ink pen that he'd pulled fresh from a cereal box. I'm still unclear as to why I wasn't aware that we possessed a prize bearing pack of cereal. I happily accepted the grinning utensil and proudly placed it on my desk.

Before long it was time to draw something spooky so I grabbed my new treasure and took pleasure in simply handling the skull cap as I removed it. Immediately I was faced with a common case of new pen ink flow blockage. So I tried the old loop de loop scribble technique to free up the ball point, but still no ink. All of my pen revitalizing procedures were fruitless and I was forced to accept that the coolest pen I owned did not function.

Still, I couldn't just throw away such a piece of art. For years I kept it wedged in my mug o' pens on its aesthetic merit alone. Ultimately, in a rare stuff-purging session I decided to toss it.

Recently, for whatever reason, the focus of my nostalgia has turned to old premium items: mail-aways, Happy Meal toys, and cereal prizes. The bony old pen popped up in a routine ebay session and the frustrating memory returned at once. Then I noticed the name of the auction and all became clear, "INVISIBLE INK MONSTER PEN- Post cereal premium."

I had no choice but to "win" the right to pay top dollar and redeem my childhood mistake.

Some further googling lead me to a familiar place, the Flickr stream of Brandon, AKA the Waffle Whiffer, a master of vintage food marketing, and thus the owner of all the Invisible Ink Monster Pens, as well as the Super Sugar Crisp box they originally came in... 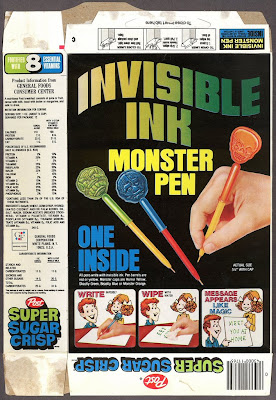 It taught me that the invisible ink is revealed when it's wiped down with good old water.

And so, once again I am the owner of the green skeleton head invisible ink pen and best of all... 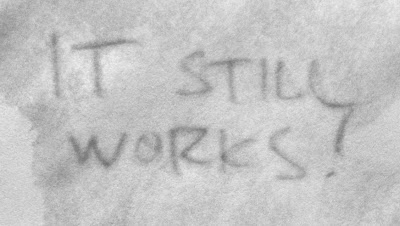 Hahah that's hilarious that you just thought it didn't work! Nice re-acquisition, and cool to see it works now. I think I had one of these as a kid as well.

and therein lies the reason I am a hoarder... You had to re- acquire I would still own it. How cool ya figured it out though.

Thanks Bubba, I can see that you understand that I HAD to reclaim it and experience it to the fullest.

Madhypnotist- this happens to me every time, I'm punished for getting rid of anything. Even the most bizarre, useless discarded item will be needed in a matter of weeks for some freak project. Tracking stuff down twice is beyond frustrating.