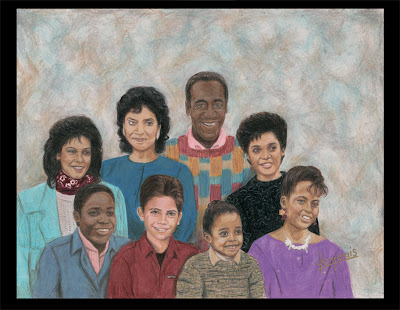 Well, well, if it isn't the very latest addition to my unending series of fictitious family portraits. Look familiar? Mighty brash of me to assume that anyone remembers my post from last December (which sadly, is only about five posts ago.) So, to recap... last year I made a custom Huxtables portrait for comedian/actor Nick Kroll but in a new twist he asked me to include the childhood incarnation of his friend (and comedian/SNL writer) John Mulaney. This is what it looked like... 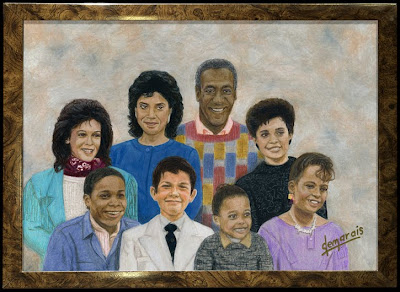 Not long after that, one of my favorite entertainers in the world, Kristen Wiig (!) (of SNL and Bridesmaids fame) saw it and commissioned me to do something quite similar. She asked for the very same Huxtables portrait except with her long time beau, Brian Petsos in boy form. Thus the portrait at the top of this post.

Recreating an earlier piece was an interesting exercise for me. I tried not to use the first one as a reference, and ended up approaching it a bit differently. So somehow I've found myself in this cottage industry of inserting white people as their childhood selves into the Cosby Show family via colored pencil.

Equally crazy is the fact that it's all for the amazing Ms. Wiig. I mean, c'mon! For years I've been professing her genius and the fact that she's on par with all of the most notable SNL alumni. Making art for her was one of the greatest, wackiest honors I've had in my creative life.

So cool, Kirk! These look great, as usual. Can't wait to see more of your new stuff!

Thank YOU and thank YOU!

Kirk, I had a fairly similar experience a couple of months ago involving a piece that I had in the John Hughes tribute show at Gallery 1988 that depicted the scene in Ferris Beuller's Day Off where the three leads form a chain with a bunch of kids on a field trip through the Art Institute of Chicago. The piece sold quickly and proved to be really popular. I was asked by the gallery if I'd create a new one as a commission, only including the children of the client into the piece. This I agreed to do, and the client turned out to be Fred Savage. I've been contacted twice since about recreating it, but revisiting it once was enough for now.

It's a weird, wild, cool feeling to have a piece of your art make such an impression that people want to be a part of it, and weirder, wilder, and cooler when you know who it is you're doing it for like that.

John- Ha that is so awesome! And congratulations on selling your Living Dead piece! It's fun to have an internet friend who's also getting to have some fun in that weird, cool art scene.