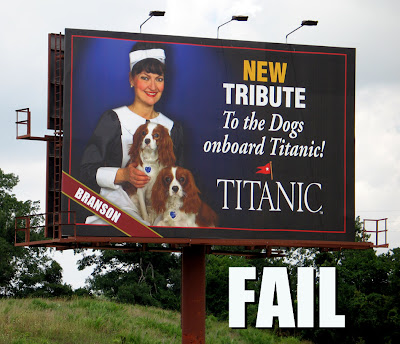 One of my ultimate goals has been to find something worthy of the Fail Blog and today I may have done it. (I just submitted it so we shall see if it ever meets their lofty standards for failure.) This is a new feature at the Tinanic Museum of Branson Missouri. Yes it's real. I'm amazed that anything can be so equally hilarious and depressing.

I've had a lot of fun speculating about exactly what it is: animatronics? a drama? a water stunt show? But after a visit to their web site I believe it's just two live dogs in confinement named Molly and Carter. The good news is, you don't have to visit a pricey museum to pay your respect to these breathing representations of Titanic's unfortunate canines — you can just visit their web cam!

Well, I say it's about time! All too often the passing of those pampered yet heroic pets is overshadowed by the fifteen hundred humans who died too. But when will we finally see the much-needed tribute to the cats of the Hindenburg?
Posted by Kirk D. at 2:16 AM

Double dog-bow all the way. What does it mean?

Planning my trip to Branson now...

Oh, that is just too much. Thanks for posting this!

Jamey- I cried when I saw this too.

David- I will be your personal guide for a nominal fee.

Gotta love Branson, even if we have our strange quirks, billboards, and marketing strategies :-)