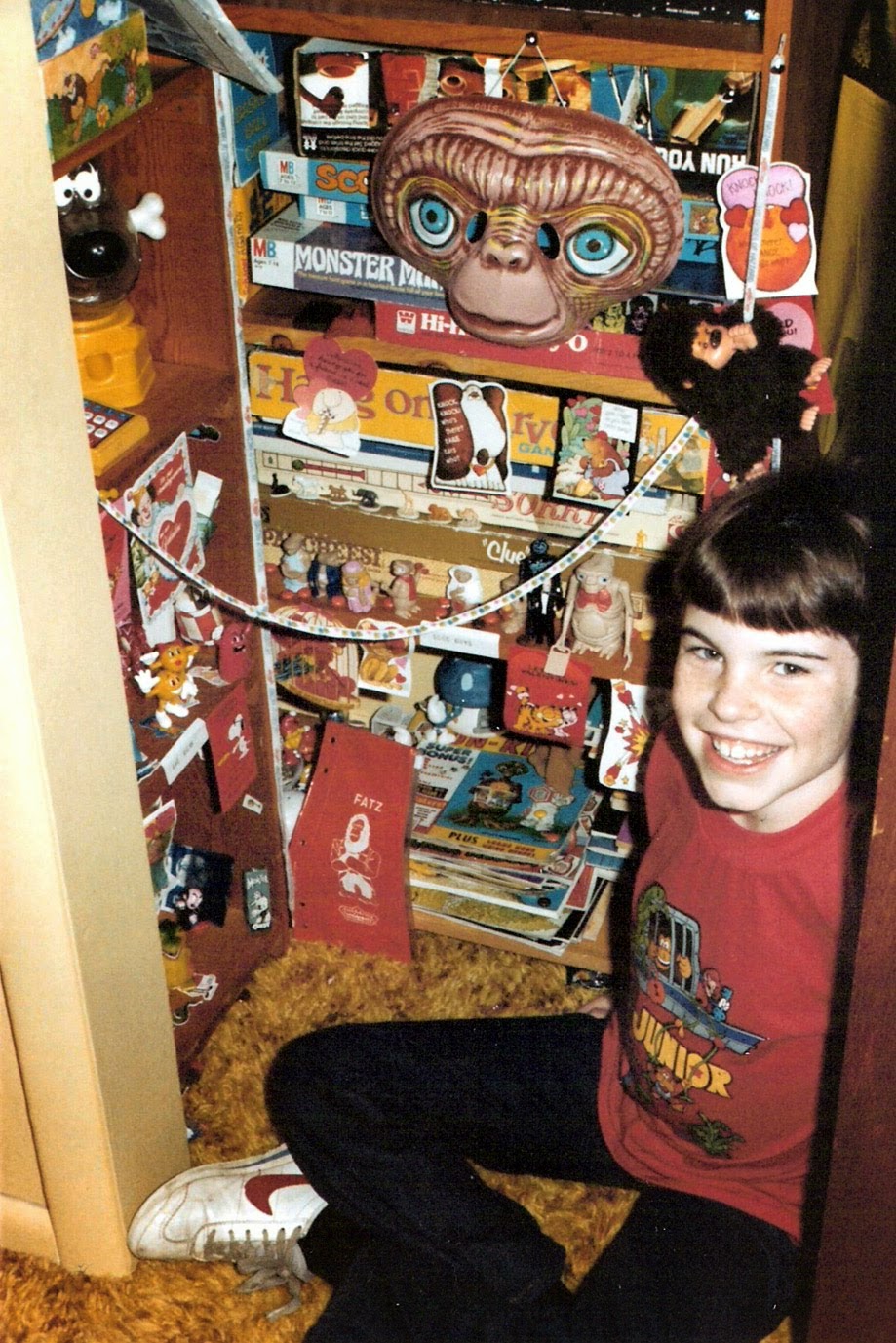 Before the Secret Fun Spot manifested as a web site, it started out in my closet. One day I decided that all of my fun stuff would be even more fun if it was assembled in one place where I could see it all at once. Thus I set up a shrine-like display in my closet where I could retreat after a tough day in front of the Atari.

Years later a The Facts of Life episode (when the girls opened up the trendy novelty shop) inspired me to unleash the fun upon the rest of my bedroom. 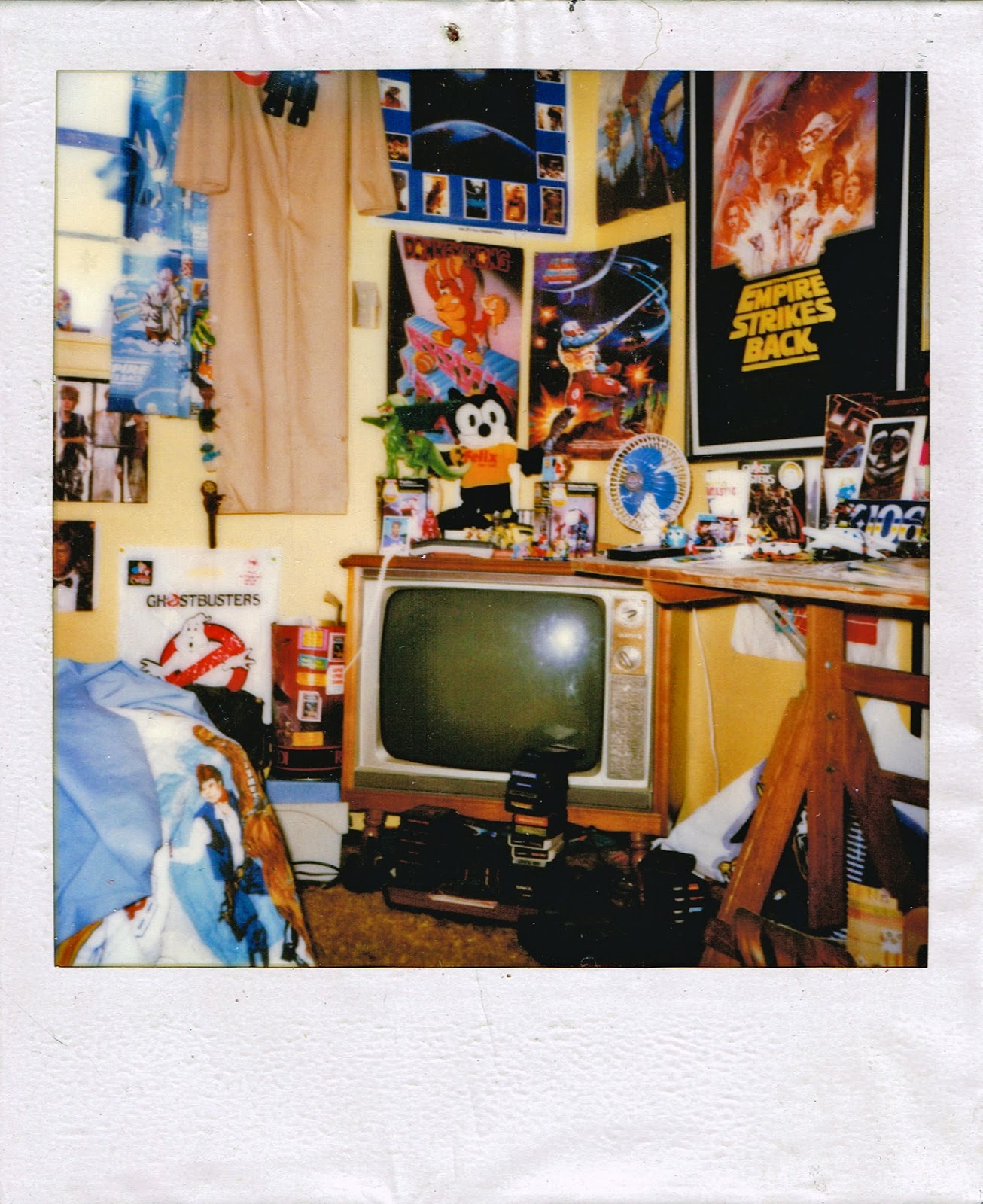 My dad assured me that the time would soon come when I would shed the toys. I secretly believed him, but somehow it never happened. Anyway, I'm not sure why it's taken me this long to share these photos with you, but here's a set that was taken when I was thirteen and more concerned with the length of my mullet than the length of my pant legs. 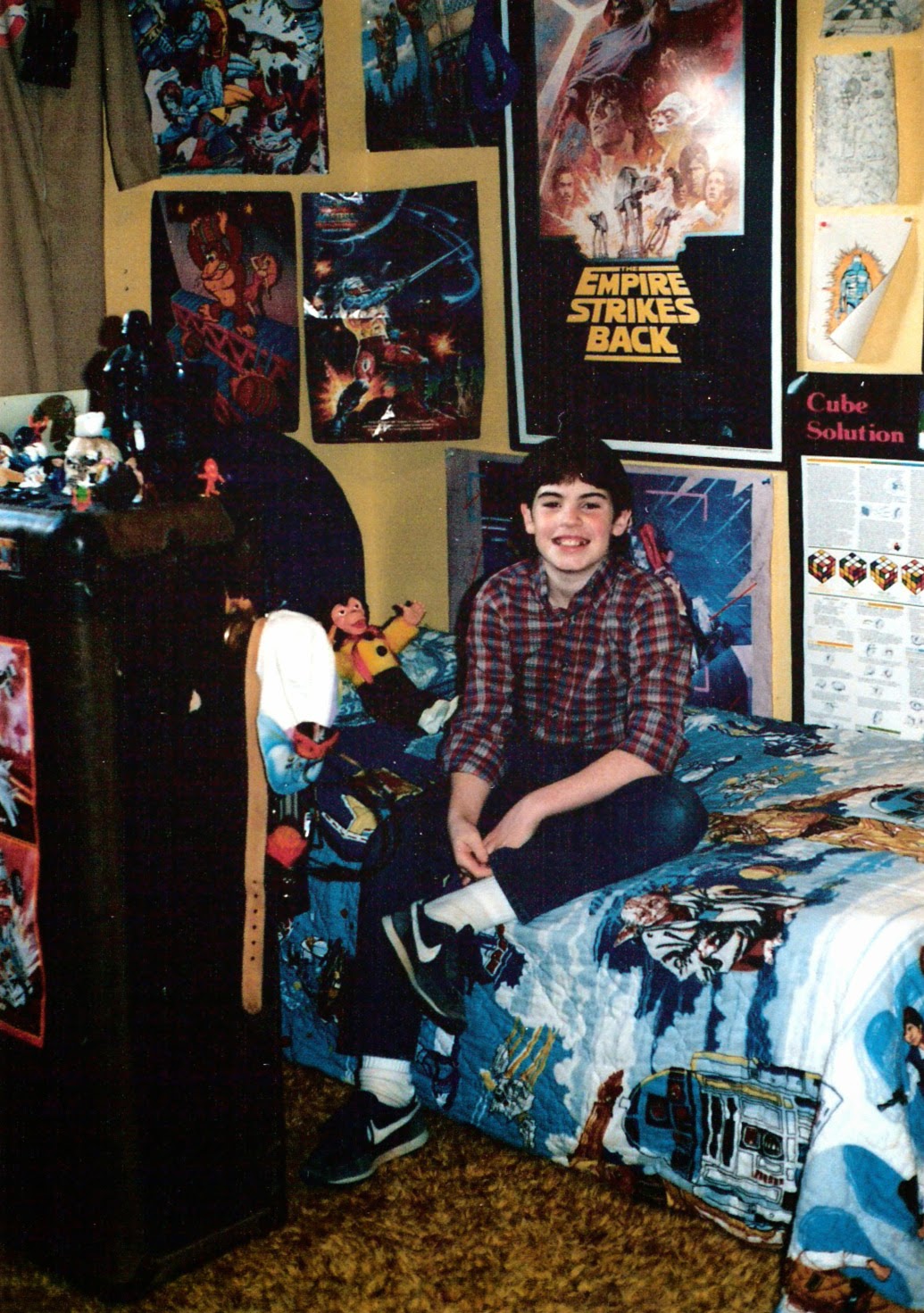 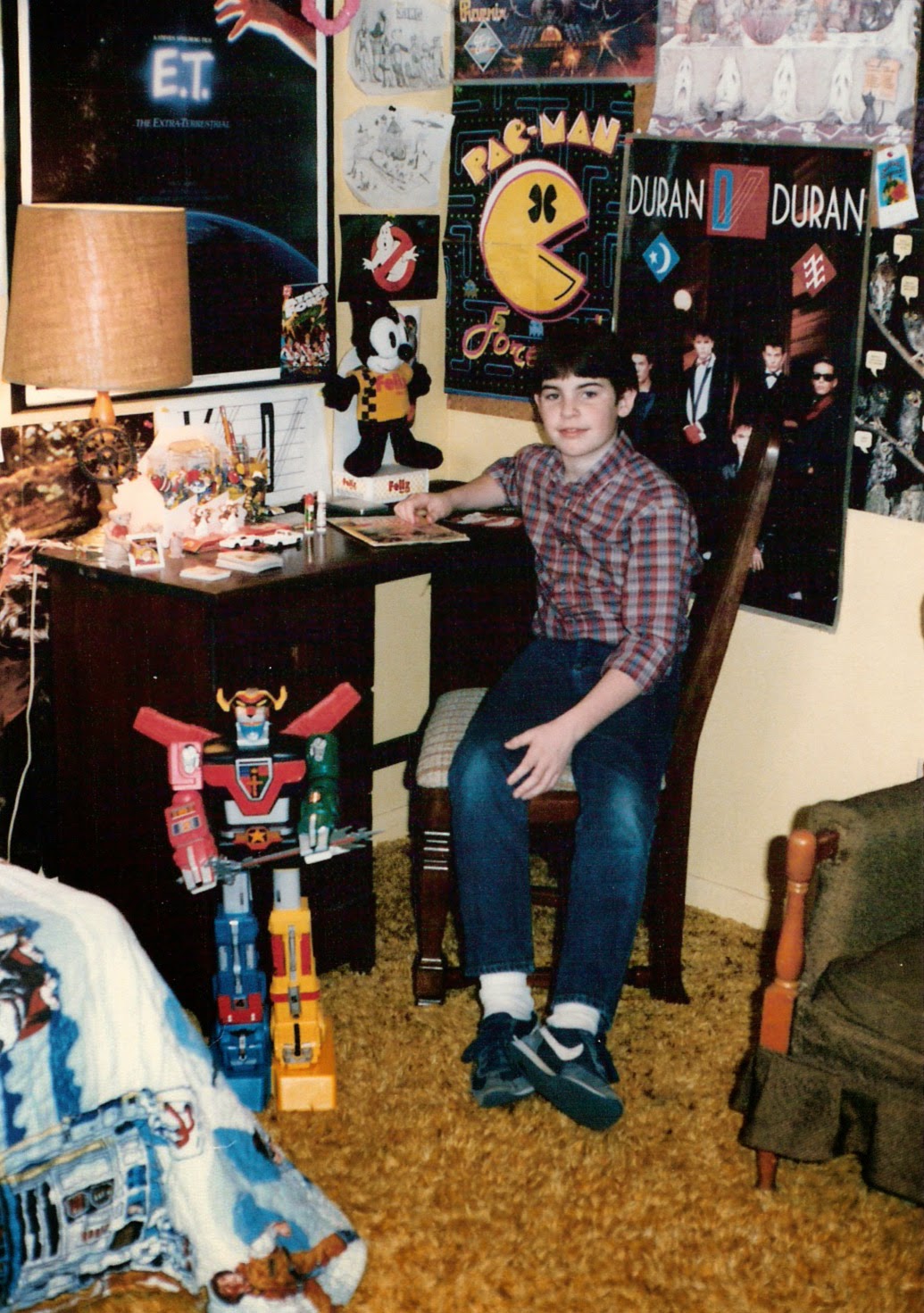 Can you find:
-Smurf Berry Punch glasses set from Hardee's
-Hardee's Camero race car with the truck and trailer
-Two sticks of novelty holiday chapstick from Avon
-Atari Force Comic Book
-Two Mogwai and a Gremlin
-A wrapper for the Marvel First Issue Covers card set
-My initials written like the Duran Duran logo
-A poster of a bunch of monsters at a dinner party from Dynamite magazine
-The E.T. figure from the E.T. board game from Parker Brothers

(You can't see it, but behind Felix the Cat's ear is a jumbo size Lisa Frank bear sticker) 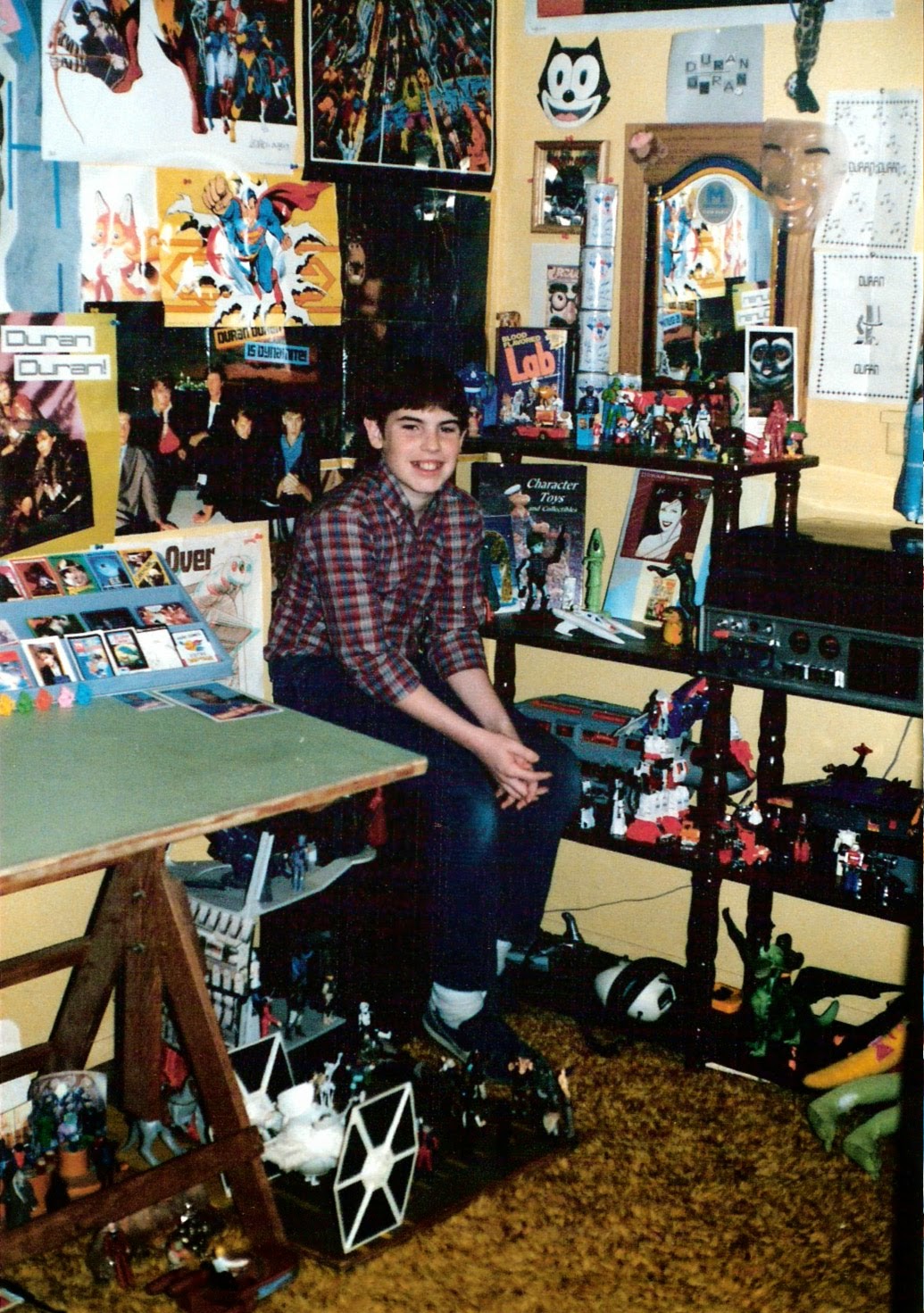 BONUS PHOTO: That is one fine Gremlins collection... 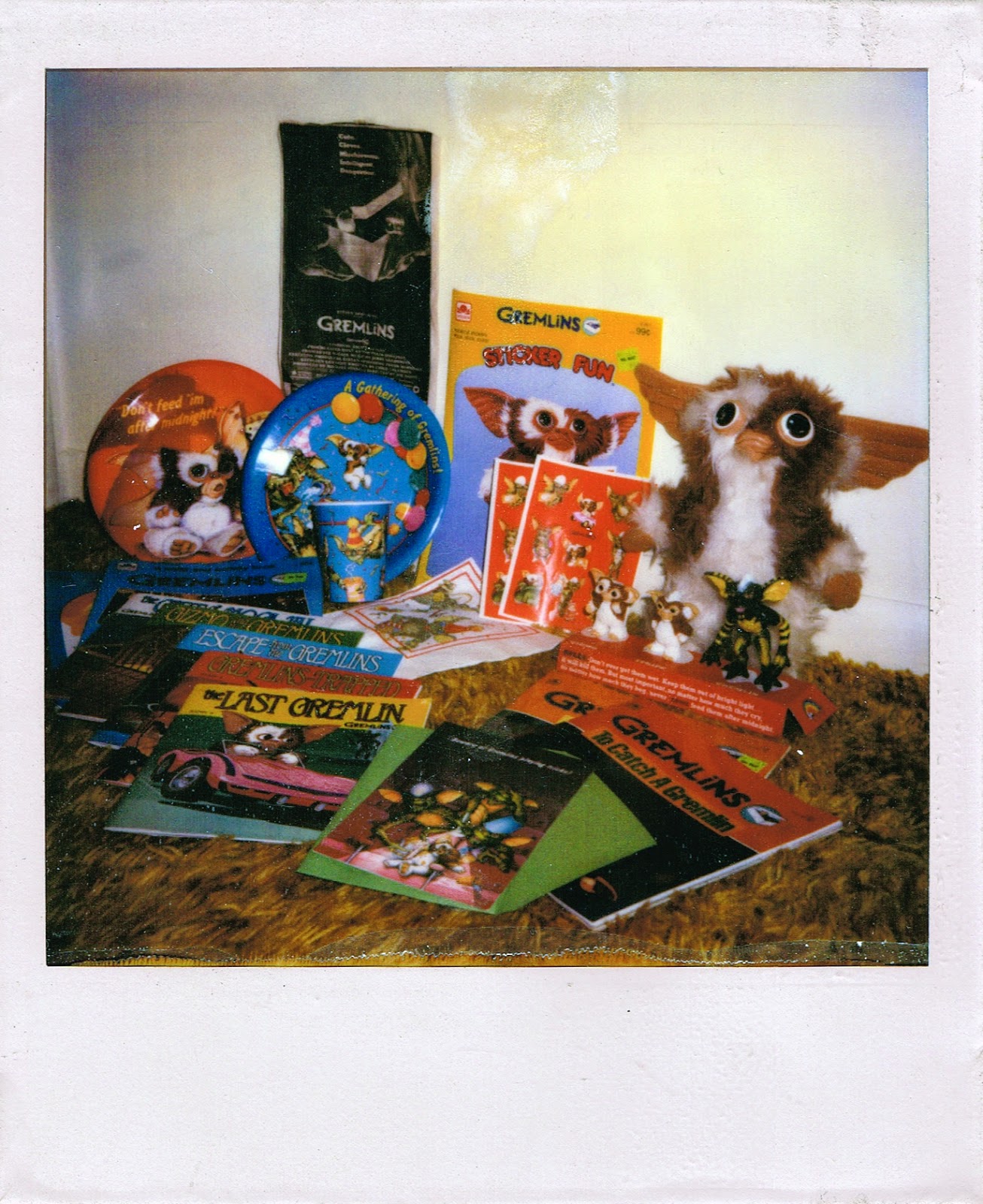 There is just Too Much Awesome in these photos, Kirk, and it goes far, far beyond the obvious Star Wars stuff :) The Buck Rogers starfighter?! The Rubik's Cube solution poster?!? The >insert band/celebrity/cartoon/comic logo here< printout in dot matrix form?

And Oh,Dear God, RUN YOURSELF RAGGED. I'm having an awfully hard time dragging myself back to 2010 here...

Wow - I haven't seen such eighties goodness since...well, since the eighties! But Duran-Duran? seriously? I think I had a Duran-Duran sticker on my Trapper-Keeper in 6th grade; but that was strictly for the chicks, man. Great collection, though - thanks for sharing!

Wow - you are no retro-hipster-collector-wanna-be Kirk. Very impressive! I had that same gold shag carpeting in my bedroom in the 70's.

This blog is great! And the line: "Years later a The Facts of Life episode (when the girls opened up the trendy novelty shop) inspired me to unleashed the fun upon the rest of my bedroom" pretty much sums up my entire life philosophy.

Makes me wish my parents would have let me keep my things instead of throwing them out every year!! Great post!!

great pix kirk, and can you tell me about the shoes? they look to be the same "nike" fakes i was forced to buy as a kid.

Oh man...think you might be the only other person I've ever heard of that set your stuff up in the closet like that.

I did the same thing around '89 or '90, and all my coolest possessions were set up very neatly inside a space about 4 ft across, 4 wide. I had a desk in there with a small chair and I would sit in there for hours, looking at my Gremlins 2 poster while my older brother made fun of me.

Man those photos are awesome. I had aspirations like putting all my toys together in one spot, but then I would get distracted by something shiny and then the idea would be gone for weeks.

We seem to have had similiar tastes when we were kids. (You had many of the same items I had as a kid - like the highwaters. :)

Here's a good one!
http://www.toywhimsy.com/2010/02/wooly-willy-flash-back-friday.html

Ok, I gotta know. Is that a drawing of ROM Spaceknight next to the Empire poster and above the Rubik's Cube poster?

Great stuff as always, thanks for posting!

There are parts of my house that still look like this, BTW. Notably, my tiki bathroom.

Dano- A 12 year old living in a small town in 1983 could do a whole lot worse than Simon Le Bon and the crew. I'm still down with DD.
Plus, thanks to Duran Duran I was a 7th grader who had something to talk about with the 9th grade girls in my first hour study hall.

Jeremy- that's a good philosophy to have. I've held on to it as well.

Patrick- Thanks! I wonder if there's a childhood bedroom flickr group. I'd enjoy that.

Giddy Vintage- Ha, that brings a funny thought to mind, of your folks bringing in a trash can every December 31st and asking you to empty your room (again).

plcary- I think those Nikes were the real thing, but I'm sure the pair I had prior were less "on trend." Those photos were taken just about the time I started wasting my parents money on name brands. I would soon be brainwashed into Polos, Guess, and 501s.

J- ha, I can certainly relate. It sort of felt like my own office. And yes, hours would go by and now I can't imagine how I filled them.

shornk- it's never too late to corral your toys.

Savage- It's funny how many flood jokes I had to hear before I finally figured it out.

docweasel- Classic! I have one of those around here somewhere. They started out fun and ended up frustrating.

Todd- What you see there is my first attempt at blatantly ripping off another character. I was into ROM big time then (#1 was the first comic book back issue I ever bought) so I introduced my own variation of him to the group of characters I always drew. I had another guy who looked like a sleestack. Good eye though!

Aaron- ha, I still have him (he's in my son's room) and he's supposed to be remote control though he only goes forward and backward and the remote is attached to a short wire. He always reminded me of the Shogun Warriors I was forbidden to get when I was very little.

Yes, I still maintain a room of fun too.

Oh Keeper of the knowledge of action figure card backs, you were a closet collector and then blossomed forth into your bedroom and into the future. It looks like you had parents who encouraged your passions. I could tell by the starwars bedding AND curtains and what looked like a project or art table in your room. VERY COOOOOOOL. You are one of we who are driven to record and archive our passions for posterity. Sharing is the best way to enjoy it all. THANK your for sharing your history and toys!! Betty