UPDATE: If you'd like to see all of my film family portraits including more recent ones you can go to my portfolio.

Once again I had the honor of contributing a collection of film family portraits (done in colored pencil) to the now annual Crazy 4 Cult art show at Gallery 1988 in Los Angeles. The show begins today and runs until the 8th of August. The entire show can be seen online here.

Here they are (You can click each one for a super-enlargement)... 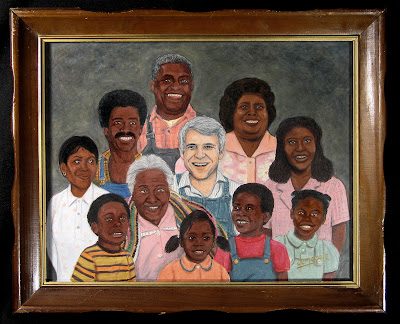 The Johnsons
based on The Jerk
SOLD! woohoo! To Paul Scheer no less!

In following with the tradition of most movie sequels I decided to go bigger this time— with the biggest family yet. So I turned the face count up to eleven (to take a cue from another favorite cult film.) I like how it depicts an important story/character point, but it's also a sight gag plain and simple. I have to give credit to my friend Jeremy for suggesting this one. I don't know how I was overlooking the possibility. It holds a place of honor on my DVD shelf and is easily one of my all-time favorite films. 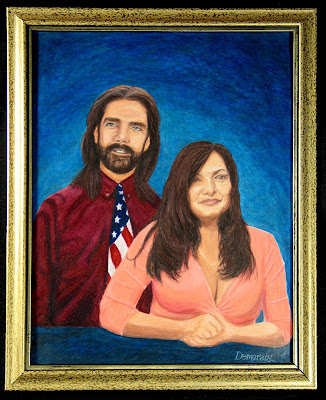 The Mitchells
based on The King of Kong: A Fistful of Quarters

Though this is more of a neo-cult movie, I couldn't resist because to me Billy Mitchell is one of the most captivating characters to have ever graced the silver screen; which is even more amazing considering the fact that he's a real person. (But couldn't you see Ben Stiller playing him perfectly?)

Billy was the subject of an artwork by Aiyana Udensen that appeared in one of the I Am 8-Bit shows, which gave me pause, but then I realized I was the one destined to usher the lovely Mrs. Mitchell into the pop art world. I broke from my Olan Mills motif here and tried to venture into Glamour Shots territory. (And thanks goes to Jamey for urging me on this one.)

However, this piece will not be appearing in the show proper because the frame glass broke in the mail and left some marks. (I'm going to touch it up and it will remain available for purchase on the G1988 site. I have touched it up and it has been sold.) I searched extensively for just the right cheapo, gaudy-glamorous frame, so it stands to reason that the glass would betray me. 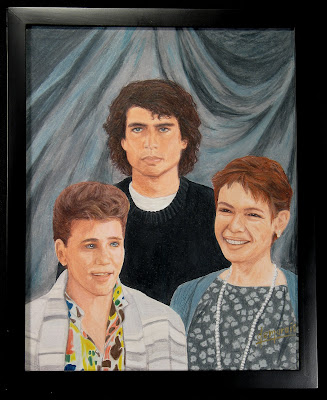 The Emersons
based on The Lost Boys
I count The Lost Boys among the top five most influential films of my youth. (Incidentally, the others are Pump Up the Volume, The Karate Kid, Footloose, and Ferris Bueller's Day Off.) I wanted to see what it might look like if mom would have talked to the boys into a photo shoot in an effort to redefine their post-divorce family unit. I could see Sam (Corey Haim) getting into it (he may have had some say in the cheesy curtain backdrop) while Michael (Jason Patrick) would have had to struggle to tolerate such an outing. Keifer Sutherland's character David might have provided more visual interest, but the notion that he and his dad would ever get together for a photograph was too far fetched. 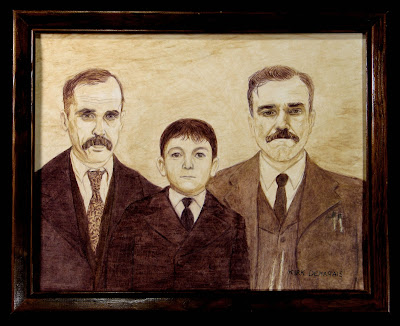 The Plainviews
based on There Will Be Blood
SOLD!

Yes, another newbie in the film world but the cult of Paul Thomas Anderson is a mighty one. When this notion crossed my mind I liked the idea of spreading this wacky portrait concept into another era, and I grew eager to draw Daniel Day-Lewis's face. The more I studied it the more I wondered if he's ever been kicked by a mule. This only contributes to the fact that when he's on the screen I can't remove my eyes.
I won't spoil it for those who haven't seen the picture, but I love that this moment captures a particular deception, and I positioned the subjects accordingly.

So why these? As was the case with last year's selections, it gave me another chance to create four more love letters to four of my most beloved cinematic productions. I also chose them because family plays a strong role in each of these films.

Interestingly, I happened to discover this week that all the other artists abided by a list of cult films that was designated by Jensen, the curator. Since I was a latecomer both years I managed to miss out on this detail. On one hand it was nice not to be constrained (there might not have been enough families within the list that would work with this particular concept), but I'm cringing as I imagine the other artists saying "Wait a minute, I would have liked to do [film x]! Who does this guy think he is, some creative renegade playing by his own rules?" Well.. maybe it wouldn't be so bad if they thought that.

I spent the month of June (plus a week before and after) immersed in these silly things. It was an interesting and debilitating artistic exercise. Just like last year, I think the outcome is a mixed bag of successes and failures. I often found myself comparing the work to drawing Ziggy comics.. Both are single panel gags in a sense, and the effect I'm hoping for is similar- a momentary grin or perhaps a slight audible expression of pleasure at best. But Tom Wilson, the Ziggy artist, can be thankful that his don't require one third of his summer just to draw four.

For convenience sake here are my submissions from last year too... 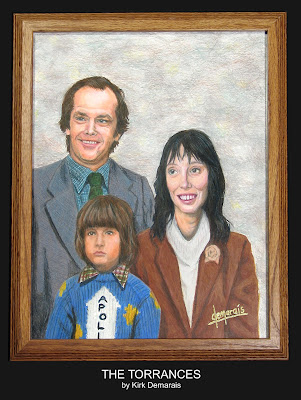 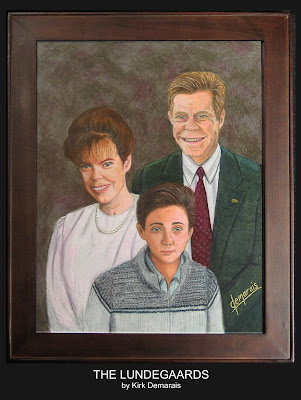 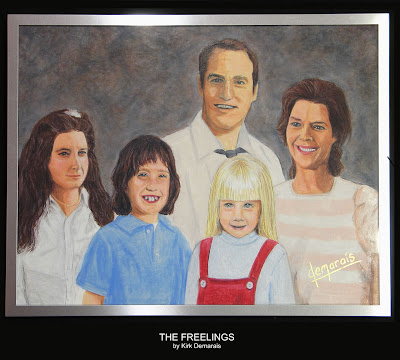 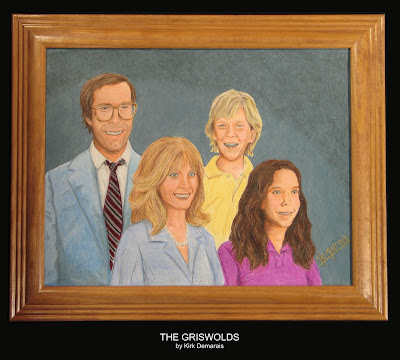 based on National Lampoon's Vacation

Check out this post if you care to hear more about the process behind them.
Posted by Kirk D. at 12:35 AM

These are another great set of portraits Kirk, I'm sure they'll go over like gangbusters.

I really like your Jerk family portrait. (It's also on the Gallery1988 email about the show tonight.) Good luck tonight!

Brilliant work!! Sequels usually fall short but you channeled The Godfather II and The Empire Strikes Back for your second time out. Way to go!!

These portrait are not of that quality but these are memorable.

Wow! I didn't realize you were such a talented artist. Though it doesn't seem fair that you can hold SO MANY talent cards.

I really hope you are bad at cooking or something. That would make me feel better.....

kirk, these are great. i already have a suggestion for next year.
instead of family portraits, single business portraits of employees from ENCOM from TRON. like what they'd have on their ID cards.

re The Mitchells portrait: the glass broke in the mail and you have to touch it up? How oddly ironic. But can you prove that it is still the original picture and hasn't been tampered with? Perhaps you should redraw the entire pic in front of a group of Billy Mitchell chosen judges just to be sure...

Shawn- Thanks! Since I was using screenshots from the film as reference material it was impossible to avoid his open mouth.

Savage- I will always have fond memories of hanging out with you last year. May it happen again!

Todd- Thanks, although were it not for the Jerk I think this would be a Ghostbusters II effort.

Custom T-shirts. How kind, and have a free link on me.

akbar- ha! Good point UNLESS they took the picture right after they arrived in Santa Carla.

Anthony- you may be on to something there. Or how about Employee of the Month photos.

Cyn- thanks so much!

t- haha, very good point. And I was wondering why I discovered some men in my garage examining my art supplies.

Just noticed on the gallery's website, under your pic of "The Torrance" family - it attributes them to "The Shinning"... I believe that was, however, the name of the Simpson's version of the same movie.

T- I'm proud to say that I noticed the same thing. That is some unintentional awesomeness.

So awesome! Blogged at Pretty Ghetto

Vader, Luke, and Leia would be a great family portrait.

Thanks for the link cheech!

dan- ha, can't believe that one hadn't occurred to me yet. I wonder what family portraits looked like in the Star Wars galaxy.

I realize you posted this almost a year ago, but i just saw it. do you sell these? i would love to buy one!

thanks for your interest!