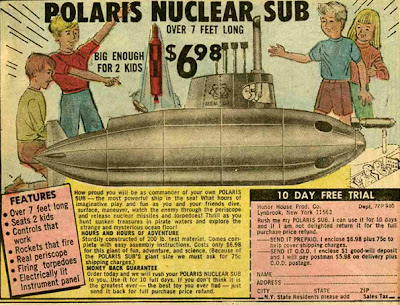 Somehow I missed this last Summer when it made the rounds via Boing Boing, but here's a wonderful look at what arrived when you ordered the Polaris Nuclear Sub which was seemingly offered in every single comic book printed throughout the 60s and 70s. Until now I've only seen the ubiquitous advertisement, but here's the real thing... 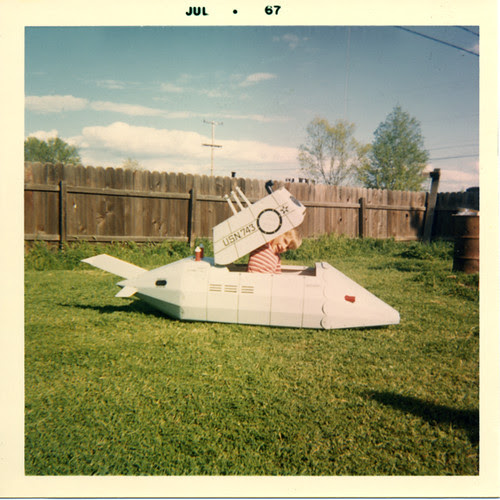 The owner of this photo says...
"I remember this as being a pretty cool toy. It had a little mirror periscope and you could fire the torpedoes and missiles. They shot out using a rubber band sling shot built in. Being immobile it was a bit difficult to aim, but if the dog or my brother happened to pass by the front of the sub... POW! Got em."

Say, I can't get your email link to come up (my issue) and I can't find our correspondences in my saved mail (also my problem!). I have a Flip DVD question for you which Todd hasn't answered. Would you please be able to email me at koningsmark a.t. yahoo dhat kham?
Thank you!
Brian

Still it looks very good, and I would have loved one as a kid.

Nice to see you posting again Kirk, and thanks for the "add" too!

The photo is a total revelation... I mean, how many times as a kid did I almost mail my money off for this thing only to be held back by a worried parent? It's cool to see that it really was a neat toy and not some disappointing scam, although the claim of "over 7ft long" still seems to be pushing it. Would kill to see pix of the "electronically lit instrument panel."

Wow, *way* cooler than I ever guessed (as an adult mind you; as a kid my imagination wasn't quite so tethered to cynicism).

My old elementary and junior high school best friend ordered one of these subs. He was always ordering the cool stuff my folks couldn't afford to get me, since we were poor as paupers in the '60s. Anyway, I was there at his house the day it came, and I well remember helping him assemble the sub in his folks' dining room. His dad (a pastor, mind you) came home, saw this cardboard contraption, and started cussing him out for buying such a hunk of junk, while giving me dirty looks since I was a likely co-conspirator! I've never been so scared in all my life! My friend however seemed used to these outbursts, shrugged, and I helped him drag the wobbly, unwieldy cardboard-box thing out into the back yard and to the trash can. Buh-bye, cardboard sub!

happy- I emailed you. If that didn't go through then click the 'email me' link on bottom of the secretfunspot.com main page.

david- definitely cardboard. They also made cardboard doll houses, etc. though it is a couple steps up from a refrigerator box.

karswell- yeah, its like they had this pretty decent toy to advertise but they got greedy with the "7 feet" and the electronic panel. I wonder if they would have sold more if they would have just called it "Large cardboard submarine that shoots rubber band missiles! "

jason- thanks for the article, I hadn't seen that. Yes, it seems the space ship and tank have potential to be cool now. (although they sure wouldn't display very easily.)
I've read that the log cabin was a plastic sheet that you throw over a card table. (I'd still buy one though)

anonymous- thanks for sharing the cool memory. Man, its too bad that they trashed it. In the hands of an imaginative kid that piece of junk could have been hours of fun.

I so wanted one of these as a kid, but my folks wouldn't buy it for me. I ended up making one of my own out of a cardboard box. I also had my own Enterprise. My vivid imagination was a handy thing.

I had the Jet Rocket Space Ship version when I was about 7 years old (1956). I loved it and spent many hours parked in front of the TV with me inside peering out through the front hatch. I remember having a pillow inside to be comfortable. The cardboard got so hand worn and used it lost all its stiffness and just kinda sagged into a limp mass.

This picture has been floating around a while, but I'm not convinced it's a version of the Polaris sub. I think someone had a creative and artistic dad. The sub we received was more like a box, larger, and surely wasn't grey.

Yeah, the real sub was just a brown cardboard box. If it'd looked like the picture above, I wouldn't have been nearly so disappointed (although I firmly believed it would really go underwater until the day it arrived).

this picture is the real deal.
i had two of them.
-i still have one of the torpedos.

As a kid in the 60's, this was a toy I desperately wanted. But my father would've let me get it, even when I saved my chore money. All he'd say is "You're not wasting your money on that junk, it's just cardboard!" My father was a product of the depression, so He was how he was, but man I would have loved to own that submarine. Oddly, as an adult now, I work at the largest shipyard in the U.S. building aircraft carriers and submarines.

Perhaps over the years they changed the style. I also was convinced it would work in or under water. I loved looking at that advert and dreaming... Was there ever a Bazooka Joe version?

Alan- The whole Bazooka mail-order line is a giant mystery to me. I'd love to know more about it.