In a brilliant move, the nearby drive-in theater which doesn't typically show "first run" movies started showing Cars during it's second week in release. It must have done them well because it's been "held over" ever since.

Watching a movie about cars from inside a car is a novelty that I couldn't pass up. We thought we'd "play it safe" by arriving thirty minutes before showtime. But just as we exited the interstate, we encountered a shocking scene...

The vehicles awaiting entry into the Drive-In not only filled up the lengthy driveway to the ticket booth, but spilled onto the highway for about a half mile in both directions. In the past I've never had to wait for more than a couple cars before getting my ticket. At first I was disappointed because I figured that the place would sell out at any moment. Once I got past my annoyance it dawned on me that this was truly a wonderful sight. Our little drive-in theater, whose future I've often questioned, was absolutely bustling in this year of 2006! When I thought about it, all the right factors were at work.. it's a highly anticipated, family-friendly movie, still relatively new, shown on a holiday weekend, and the subject matter couldn't be more suitable to the venue. I crossed my fingers and got in line. I figured that even if things didn't go our way it would be kind of cool to get turned away from a sold-out drive-in movie.

After reaching the entrance we looked back and noticed that droves of customers had queued up behind us... 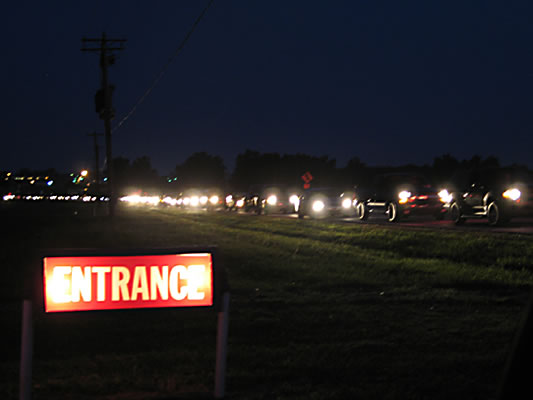 The collective enthusiasm made it easy for me imagine what a Saturday night in the 1950s was like. The movie had been playing for ten minutes when we pulled up to the ticket booth, but I was thrilled to see that there was still room for us at this popular event. 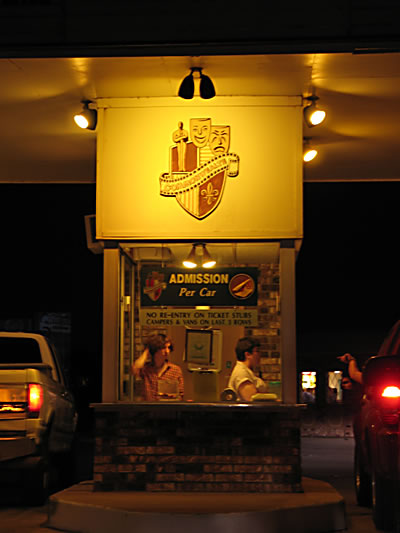 Surprisingly, there was a parking space for everyone who waited. And I was shocked to discover prime spots available right up front. I think "walk-in" theaters have trained people to avoid the front rows, but at this drive-in, parking in the back makes the movie appear about the size of a QuickTime window on your computer monitor.

Pixar did so well at giving human characteristics to the onscreen cars that as I looked around the lot it felt as if the vehicles themselves were the ones being entertained by the movie. At one point I noted that the cars at the drive-in were watching a movie depicting cars at a drive-in watching movies about cars.

I couldn't write an accurate review of Cars if I had to. It was merely one contributing factor to the fun evening we had. The movie was what tied together the moments of fiddling with the volume knob, studying the other patrons, hunting spilled Junior Mints, showing my son around, commenting on different scenes, wiping down the windshield, navigating my way to the concession stand, and repeatedly taking in the starry sky. It was great, but watching it on DVD will be a completely different experience.

A strong message in Cars is that unless folks take time to enjoy those diversions that are off the beaten path.. they will vanish. I find it extremely interesting that the movie itself is prolonging the life of one of these very establishments.

Next thing I knew, it was my favorite time of the evening... Intermission Time! Thankfully, our drive-in uses an intermission countdown from the 1950s as well as a nice collection of vintage advertisements. (Even M&M ads from the 1980s can generate a surprising dose of nostalgia.) By the time they're over one cannot resist the urge for "piping hot coffee that puts a man on his feet again" or "freshly popped corn covered in rich, creamery butter."

The second feature, The Shaggy Dog afforded me plenty of time for snapping photos. Click any one to enlarge it... 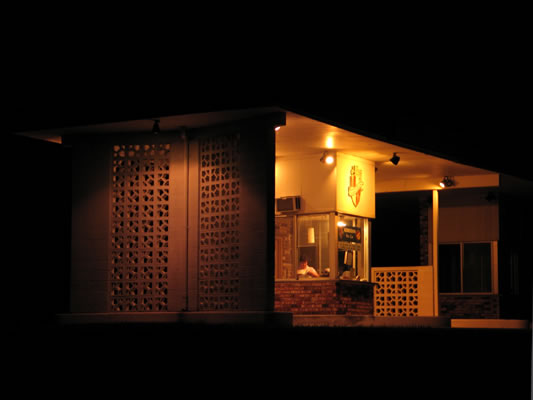 The ticket booth from afar 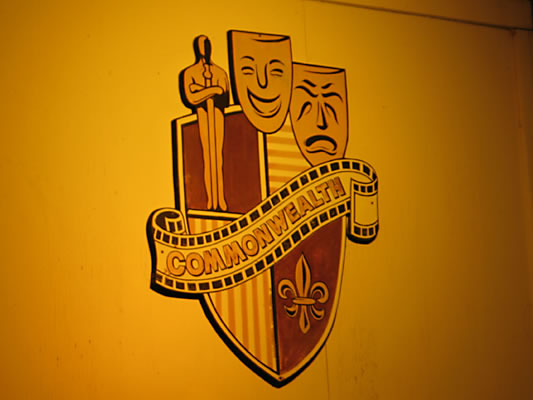 Proud members of the "Commonwealth" 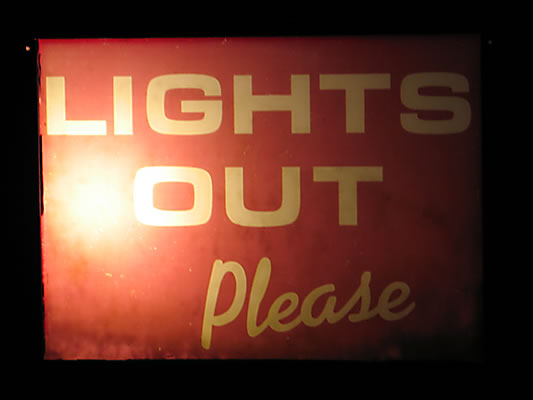 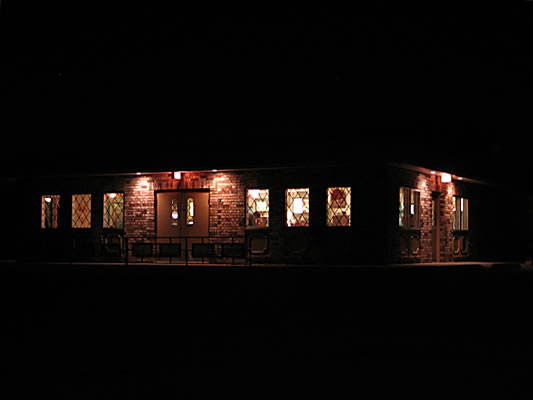 Like a beacon in the night, the concession stand is ready to serve 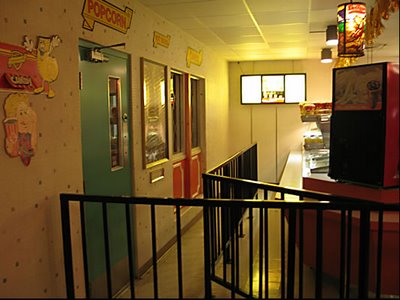 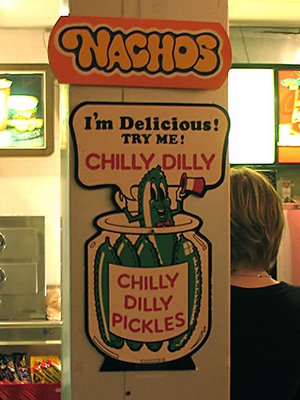 Chilly Dilly Pickles have been a drive-in staple for half a century. 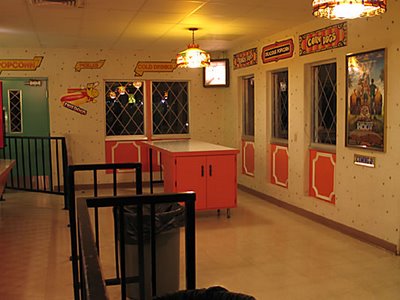 The orange and turquoise color scheme, the crisscrossed windows, the colorful signs, the stained glass lights, the tile on the walls.. so many fun visuals at work. 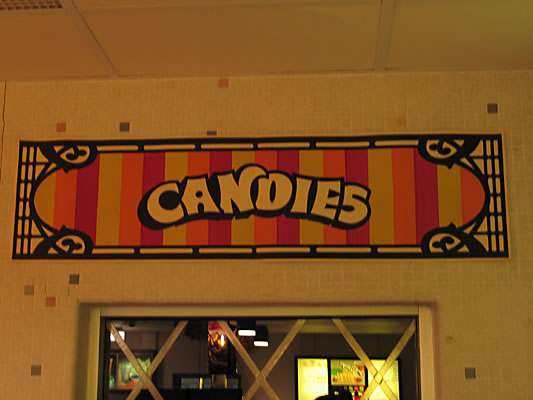 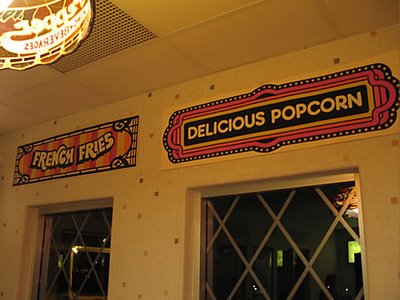 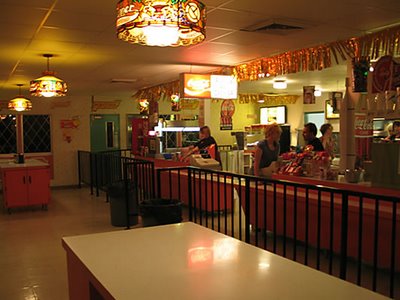 Though it would be quite at home in the 1960s, I think this place was actually built more recently. 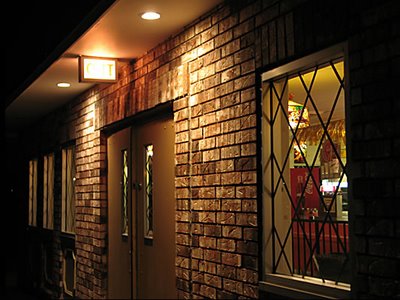 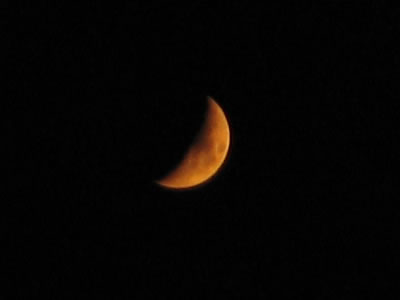 The man on the moon takes in another free movie

If I may slap a moral on this tale.. while attending your favorite drive-in take the advice of the singing food and visit the snack bar. It's so tempting to pack a huge cooler of goodies for the night, but most theaters (drive-in and otherwise) are almost entirely dependent on concession sales.
I left the pleasant evening hoping that I'd get to attend another overcrowded drive-in feature someday. Looks like my dream may come true because showing this weekend is a double feature... Pirates of the Caribbean 2 and Cars.
Posted by Kirk D. at 12:45 AM

So PotC 2 and Cars are playing at the drive-in this weekend? Wow... we need to go!

Its fun to see your take on the local drive-in. Ive always loved that place even though its rare I want to see both movies theyre showing.

Now we just need to get the one in Siloam running again...

Oh, I am so very jealous. We're running out of drive-ins around here, but have so many fond memories of them from my childhood... *sigh*

Kirk- loved seeing all those great pics! I mourn the passing of the Great American Drive-In. I live very close to what was once the largest drive-in in our area. The screen is still there, but the space has been converted into an 84 Lumber. There's an operating drive-n about 4 hours from us, and I intend on taking my 8 year-old son there at least once this summer so he can experience the plasures of seeing a movie from the comfort of an automobile sitting under the warm summer night sky. There's nothing like it. Thanx for the pics - I particularly loved the snackbar pics, which is very similar to the snack bar of a drive-in that my folks took me to when I was a kid - right down to the cheezy signage.

You are indeed one lucky bastard.

Hi Kirk,
Thanks for checking out my blog and for the nice comments! I've been enjoying reading your blog and checking out your amazing site. I love the flash animation stuff and I can't wait to order your Flip dvd!

My first drive-in experience was when I was 6 in 1978 and my parents took me with them to see "The Buddy Holly Story" at the Razorback 6 in Little Rock. I wore pjs and fell asleep before it was over. I don't think I've seen a drive in movie since.

I saw Superman Returns at the drive in here in KC last weekend. Good times. Your observations are very similar to mine. Drive ins rock.

Thanks for the comments all!

Jennifer- Gosh, you're not kidding! I just searched for Philadelphia drive-ins and the three that came up are closed.

Flamen- I hope you and your son make it to the drive-in this summer. What a great memory for him. We have a defunct screen in my town too. Kind of sad to see.

Il- I think the same thing almost every day.

Todd- Thanks for ordering Flip! I sent you an email.

awg- Good memory. I think it's time you go again. You should try the Admiral Twin in Tulsa. My first drive-in movie was "The Man from Snowy River" They didn't show too many kid-friendly flicks at the drive-in when I was a kid.

soonerthought- I was just thinking that Superman Returns would make for a great drive-in movie.

I wish there was still one in my town. they torn it down to put up a parkinglot

i've been wanting to check that drive in out when i'm in the area. i sometimes go to the one in marshall, (about 45 mins from harrison) i went to several shows here in harrison at the old drive in. too bad it's long gone.

Man, it's a small world. I'm reading The Corner and JPod drops this site in a post and suddenly I'm looking at the same drive-in and marquee that my family and I visited to watch Cars (we skipped the Shaggy Dog because of someone's bedtime). We may have been there the day before you (of that was a Sat.) and they had to turn people away.

The only thing we forgot was a portable radio for the sound. So we had to run the car every 20 minutes just to be sure the battery wouldn't die from the car radio being on.

And yes, the snack bar is as dodgy in person as it looks. The condiments bar is quite open to any communicable diseases or flies...but the food is wrapped OK and was pretty good considering.

If you're in an SUV or Van, be prepared to park in the rear...

Whenever I go to the drive-in, and I watch the "piping hot coffee" part of the intermission commercial, for some reason, I always think about how old those hot dogs would be if they were still around today.

2complex- that should be a song.

stranagebrew- thanks for the marshall tip.
I'll keep that one in mind.

anonymous- your visit here was no accident. it was your destiny.

Wow, this is sychronicity... I just found out that they turn the (almost) local hockey rink into a drive-in during the off season for the summer. They have portable screens set up and are showing first run flicks. The Warden and I loaded the boy up and went off to see "Cars" and "Superman Returns" just 2 days ago. It was great watching the boy try to figure out where in the world we were going, with all the popcorn and his pillow and P.J.s

He just had no reference point.

Its not quiet as cool as the Retro style theatre you went to, it was still a blast. If any one is in the A2/Plymouth, Michigan area they should make the trip and take it in.

The site for the Drive-In can be visited here.
http://www.compuwarehockey.com/drivein.html