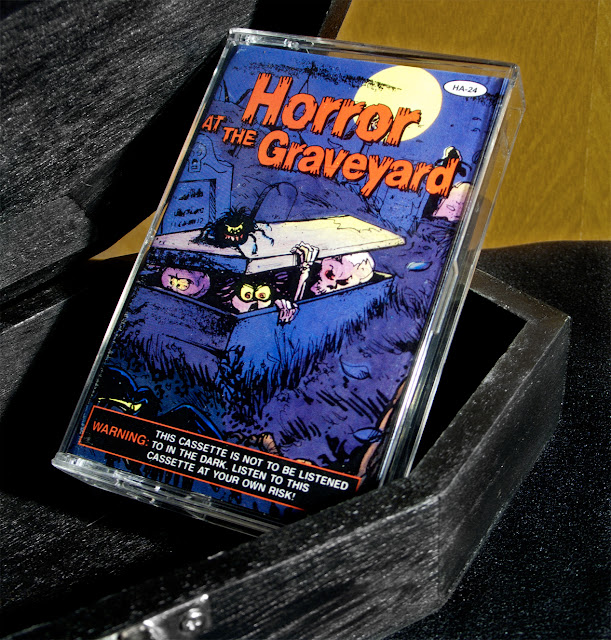 Title: Horror at the Graveyard
Manufacturer: Madacy
Year: 1994
Total Runtime: 30 Min
Repeats on both sides: No
Stories: One. Any more would be a waste.
Music: It has its own theme that sounds a bit like the "Phantom of the Opera" theme in places, only this one is literally a thousand times better.
Narration: Yes, some of the greatest narrating ever put to tape.
Distinct Audio: It's all unforgettable.
Review: As promised in the title, side one of Horror at the Graveyard is a first person account of a strange graveyard encounter. The uncredited narrator uses the universal low, breathy campfire story voice (with some audio processing) to share his bewildering experience in the cemetery. This twelve minute segment is a wonderful piece of art. I can't think of anything else that's given me the chills and laughter in the same moment, but that's how my body responded the first time I heard the narrator reveal the reason for the entire horrific ordeal (at the 12:33 mark in the video below.)

While side one is the real treasure here, the soundscape on side two is above average. It’s full of savagery and unnerving human noises. But I usually just listen to side one again.

Someone has taken the liberty of adding a slide show to the original audio (Warning: gross picture inside)...

This voiceover work reminds me a little of Nigel Tufnel's narration about "The little people of Stonehenge."