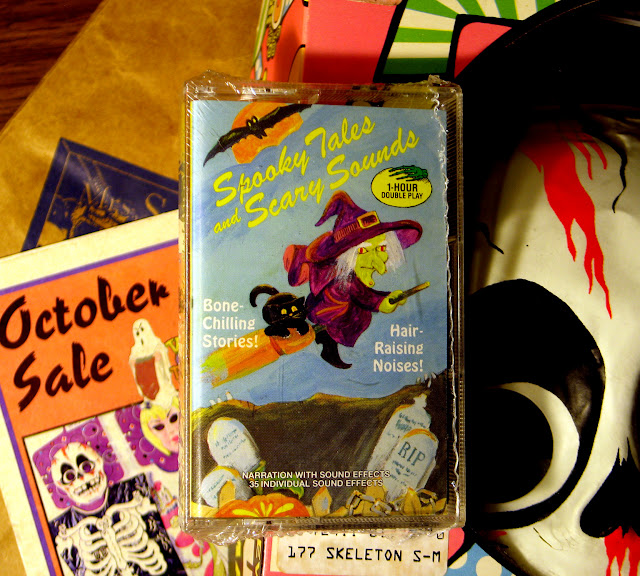 Title: Spooky Tales and Scary Sounds
Manufacturer: Holly Music
Year: 1993
Total Runtime: 1 Hour
Repeats on both sides: No
Stories: Narrated vignettes provide a loose narrative
Music: Incidental music throughout, “Toccata and Fugue in D minor”
Narration: Yes
Distinct Audio: Includes both a standard narrator, and a vampire narrator.
Review: When it comes to Halloween sound effects, there are three approaches: lone effects played individually, a soundscape of combined effects, and narrated soundscapes of combined effects. The preferred technique depends on what you’re using the tape for. As someone who doesn’t do a lot of sound editing, to me the least practical are the isolated sounds. Even if I were a sound engineer I couldn’t use them legally for anything other than home movies or amateur recordings. Those of us who are into Halloween tapes, the future Romeros and Carpenters, think way bigger than that.

The standalone soundscapes are more useful; a resource to turn to when you must spook-ify your event, living room, or drive to work.  However, if you’re in the mood to hit play, sit back, and actively listen to something eerie, these can feel unfocused, making it all too easy to drift back into the real world. (Although there are plenty of people who do enjoy Halloween soundscapes this way.) That’s when the narrated soundscape is the best option. The guide gives you context to the surrounding terror-phonics. They weave simple noises into a memorable journey.

Spooky Tales and Scary Sounds covers two of the three approaches to sound effect albums. The title is misleading because the album doesn’t include campfire ghost stories, or Edgar Allan Poe. Side one consists of nine different classic settings: a mausoleum, a vampire’s castle, and a torture chamber to name a few. A tour guide leads you along, providing backstories to each area. He even keeps the listener alive with warnings of various dangers. Side two plays a long list of effects, one by one. Each is announced dramatically which is a small luxury that prevents one from having to constantly refer to the track listing.

Production values are high, the content is original, and it’s lengthy enough that the entire second side practically seems like bonus material. Some segments are more gruesome than the cover art would suggest. Nor does the art match the level of professionalism within, but it’s just so endearing (and the Brush Script font will always have my adoration.) My copy of this tape came from Kmart, which is exactly where it should have come from.
Rating: 5 of 5

Below is the audio with a different cover image.