And in the "almost too late to be worth mentioning" news there was an excellent art show over the weekend called The JP (Just People) Show. It was curated by the amazing artist Brandon Bird and features a number of artists' depictions of the humans from the Jurassic Park films, no dinosaurs allowed.

It was my honor to participate in the event and I decided to pay tribute to a human who helped contribute to the success of the franchise early on, Chip Kidd.... 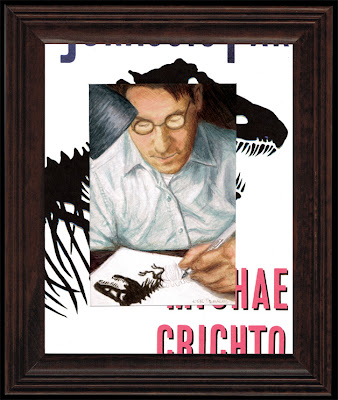 In addition to being a personal influence and cultural hero of mine, Chip designed the book cover for Michael Crichton's best selling novel which helped establish him as the most revered book cover designer of our time. In Mr. Kidd's live presentations he likes to point out that he traced the famous dinosaur bone profile from an illustration in a book and then simplified it and converted it into silhouette. Thus the title of the piece is "Chip Kidd breaks new ground in the art of book cover design by simply tracing an image from "Vertebrate Paleontology And Evolution" by Robert L. Carroll." Chip was quite surprised when his work became the central image in the film's marketing and merchandising campaign.

Check out more of the work on Brandon's site
Posted by Kirk D. at 7:09 AM

Fuqa, Have you seen the Bat-manga book that he put out in 2008...just purchased, and is brilliant.

Good heavens, that name! More brilliant than that book is seeing your digital fingerprints upon this web site. (I've seen it but don't have it.)