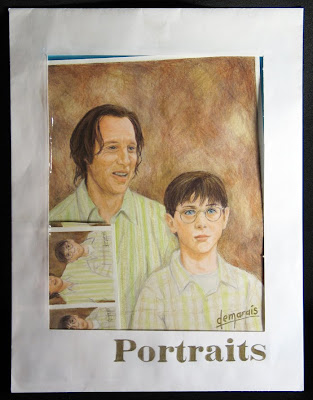 I just got back from my epic road trip to the LOST underground art show. I literally spent more time in the van than in the city of LA, but it was a blast and I'll detail the journey right here as soon as I stop seeing road markers and truck stops whenever I close my eyes. In the meantime I thought I'd share the piece I did for the show.

As you can see it's another of my film family portraits, and this time the subjects are young Ben Linus and his dad Roger from the Season 3 episode The Man Behind the Curtain. Rather than the usual frame I thought that presenting it in a packet of portraits was more appropriate since I'm imagining that the photo was taken shortly before their fateful trip to the island. An envelope is also more mysterious by nature and the leftover photos indicate that there weren't as many takers as Roger had anticipated.

I'm happy to report that the event was a huge success and my piece found a new owner. (Thanks new owner!) You can see all of the artwork if you click here. Also, Entertainment Weekly has a very informative write up of the very elaborate LOST art campaign which has been going on since summer.
Posted by Kirk D. at 8:29 AM

You nailed the Linuses in this.
You can sense their uncomfortableness with each other in the picture.

Look forward to some answers this season.

After having immediately purchasing The Johnsons the moment I saw it, gone completist insane on the 16 Lost prints, and then seeing The Linuses in person at the gallery on the 16th, I fought my way up to Jensen and made him sell it to me immediately.

Thanks for your inspired work, the Johnsons and the Linuses may bookend my beatles butcher.

I tried to find you at the show, but that place was a zoo!
reverendmilo
dcaapb.com

Rick Springfield and Harry Potter posed for a sketch!

Brian- Thanks man! Yeah, I can't believe the end is nigh.

Reverend Milo- Awesome! Thank you so much!!! I wondered if you were the one who bought it. I saw you pointing at it and then saw the little red dot soon after.
Your purchase totally made my trip!

And you were the one who video'd me when I came in right? Did I call it "Lost ART" in stead of Lost ARGS? What a @#$% I am. So sorry. I just checked out your site and it's amazing. I wish I would have discovered it sooner. Anyway, it's an honor to know my stuff is in your stellar collection. Thanks for your encouraging words and thanks for letting me know. Sorry I'm just getting around to reading comments. (That epic trip took a lot out of me, watch for some elaborate posts soon.)

anonymous- ha, it's funny because it's true.

:) yep Kirk, I was the one in the jumpsuit handling the streaming for all the fans unable to attend.

I remember you saying hello to LostArg or LostArt - it was too noisy and exciting to really tell, But you said "LOST" and that was the most important thing!

That trip was amazing and exhausting for me too, and the shocker for me was before leaving for the trip, someone asked me what artists work I hoped to see there, and you were the name that came to mind. Getting to snake your piece at the show was such a FTW moment for me!