THE JOKE'S ON BOB 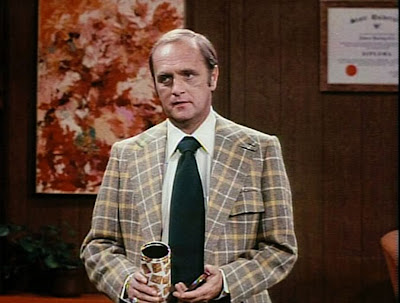 As a fellow who's well versed in the art of cramming a spring-loaded snake into a can, I always enjoy it when commercial pranks pop up in pop culture. Here's a vintage example that I just discovered thanks to my wife's Netflixing abilities. The Bob Newhart Show gave some serious screen time to the classic "Snake in the Peanut Brittle Can" gag in the episode The Longest Good-Bye (Season 4, episode 1).

One of Bob's college chums unintentionally gets him with the prank twice in a row. Just check out these beautiful snakes in action... 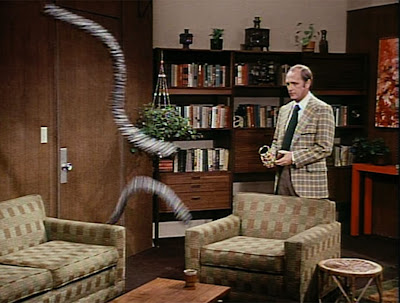 You must admit that is some astonishing snake launching distance. Please stop acting like you're not impressed.

While a nut can is more common, the Peanut Brittle can is employed for its dual snake capacity. It's sort of the deluxe version. They sure don't make springing snakes like they used to— literally. Now you're lucky to find one half as long, and I will always miss the cloth sheaths. These days printed plastic is standard covering.

Have a look at the perfect squiggly-ness of the second launch... 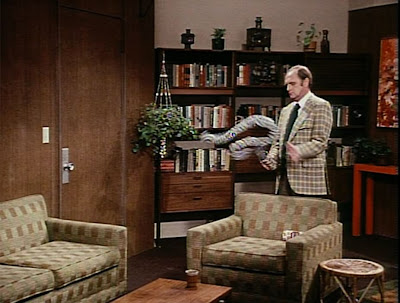 Marvelous. It looks just like the illustrations they printed in the comic book ads.

The Newhart writers actually used the joke to great effect. It serves as a tension breaker after a heavy moment, so it gets the audience roaring. Then they milk it again for a second wind of laughter.

Best of all, the gag in the show is unmistakably a genuine S.S. Adams novelty... 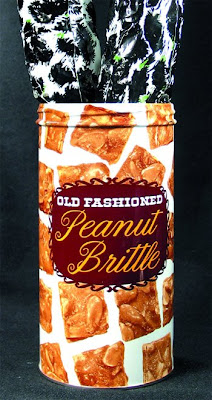 (They call it "Maple Candy" in the show to gel with the character from Vermont, but they're not fooling me.) Though Adams invented the concept nearly a century ago, they still sell these; the design is identical too.

At the end of the episode Bob tries to trick Emily with a third can. You guessed it, it's actually full of candy... 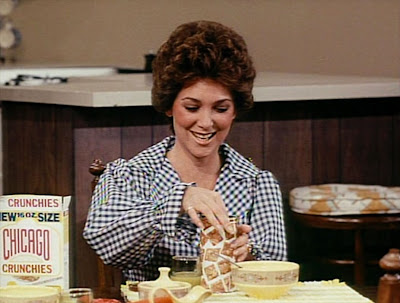 Well, congratulations Kirk on yet another post that only two people in the world could possibly care about.
Posted by Kirk D. at 12:51 AM

A few years ago I got one of these for my little nephew. He wasn't quite strong enough to open it easily so by the time he finally got the top off, every adult in the room was cheering him on, anxious to see his reaction when the snakes came out.

The thing is, he'd already seen the trick on tv and knew exactly what was going to happen, making him all the more determined to get the top off himself!

Hi, I'm Anonymous J. Coward, one of 24 Bloglines subscribers to your excellent blog, and I really love the novelties posts.

The way you describe 'em yes, the cloth ones were perfect... this is like being young again, just for a moment.

Now, if you'll excuse me, I've got to go and look for that happy childhood I was supposed to have.

edit above...........That used to be my favorite "sit-com" well that and Cheers. I recently told someone about how Newhart the show was all a dream when he got hit in the head with the golf ball and woke up with emily again...Also
looking back, I dont really think Bob is a "comedian", but even just looking at those stills makes me crack up to myself..

The other Bob Newhart show is shown on WGN at 8pm EST on Sundays.
Both are great shows.

i totally had one when i was in first grade that was a mock pringle's can. it fit 2 lengthwise. i brought it to show and tell and totally got everyone.

Magician "The Amazing Jonathan" uses the snake can gag in his act with the real-can-of-nuts kicker at the end.
In other news, I recently found my S.S. Adams "Svengali Deck" from the early 80's. Woo hoo!

I want some of those Chicago Crunchies!! :D

Great blog you have here...

My comment is a late arrival but, via the crazy machinations of the Internet, here nonetheless. I remember the Newhart episode and also had many nut-related cans of flying herpetological specimens. Cool beans! Great post.