Back in my day, the first official act of Halloween was always the adornment of the decorations. Well, that's not totally true. The act of deciding what to dress up as usually occurred before mid summer, and sometimes as early as the prior Halloween. "Aw man, the crotch seam just ripped out of my costume. Next year I'm making my own."

The decorations pictured here were among the first I ever purchased. I think I was in first grade when I walked into homeroom and discovered these spooky rascals sprucing up the bulletin board (surrounded by an orange, wavy, corrugated border of course). I had never considered the possibility that September's "Back to School" theme with its mundane pencils and rulers might ever be replaced by a sanctuary for otherworldly beings. Throughout the day I could barely look away from the display. I decided I liked the way the cutesy trick or treaters were offset by the houseful of obviously real ghosts.

It was a longshot, but I finally asked the teacher where this assortment came from, fully expecting her to boast of some exclusive educational depot in a neighboring state. To my delight they came from good old Wal-Mart. I caught the next family shuttle to the local Discount City and promptly located an identical set. While I had feared that this lavish, multi-piece production with its die cut edges and full color printing would pose a financial challenge, I was relieved to find a sticker price of just eighty-nine cents. 28 years later I've sufficiently gotten my money's worth. That's about three cents per year.

When I was a kid, the process of decking the halls for Halloween was an unceremonious, one-man job that usually took place in a single afternoon between the time I got off the bus and the time my folks arrived home from work. (Latchkey kid.) Unlike Christmas, there were no accompanying snacks or albums of carols to festivize the occasion. My modest ritual involved the same few novelty candles, the familiar stack of cardstock wall hangings, and a roll of Scotch tape. (If only I had known I was careening towards an era of 7-foot, animatronic, inflatable yard decorations.) The up-side to this non-event was the level of control I possessed. No bickering and no compromises, I was an artist and the wood-paneled living room walls were my canvas. (Although I usually just stuck stuff in the same place year after year.) Well, get a load of me now, here I am hanging these time honored designs on the wood-paneled walls of cyberspace. Welcome to the future, my friend. 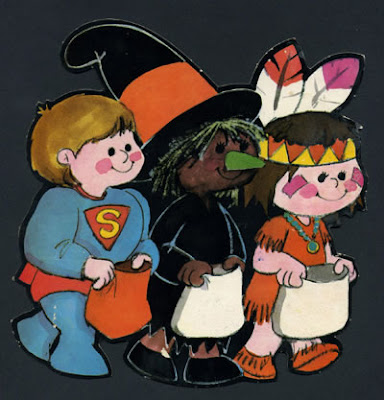 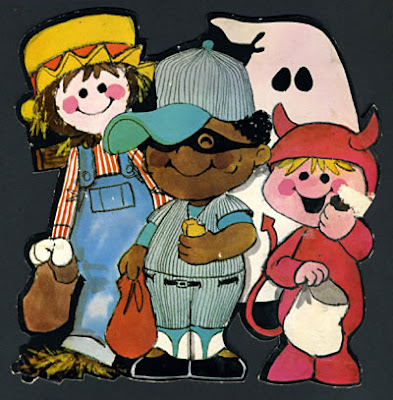 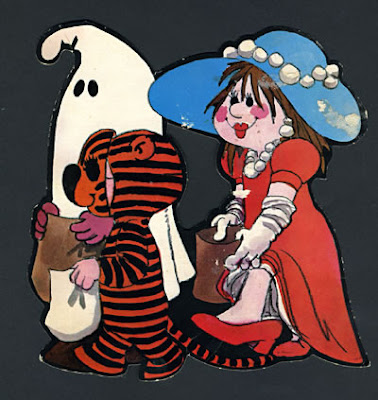 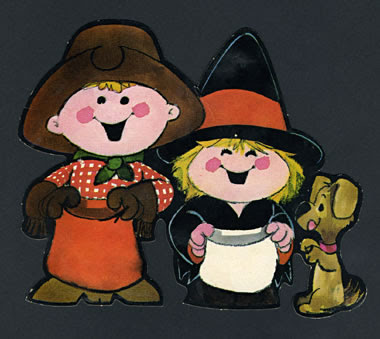 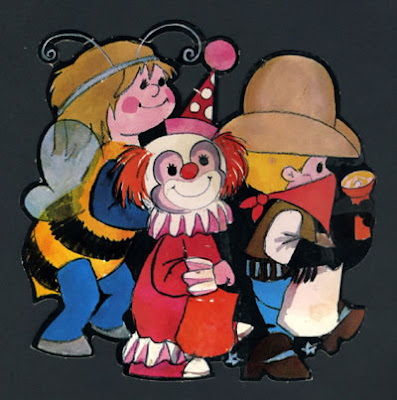 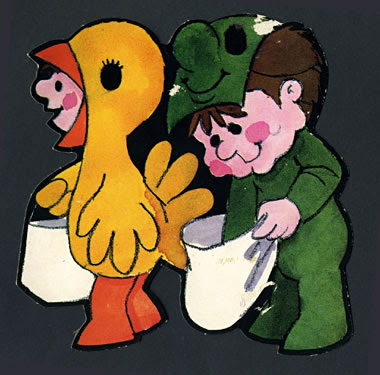 Note: this green guy confused me something awful. My parents eventually convinced me that he's supposed to be the Jolly Green Giant. Now I understand this was just a pat answer to get me to stop asking.

Looks like Supes bulked up for trick or treat and maybe the green guy is the Hulk. Only thing he forgot his purple pants.

Kirk, I'm loving this stuff! It's odd how memories about Halloween from this era have this similarity that always brings back some of the happiest moments in my life. Thanks!

I too have a Halloween theme going on with my blog this month. Check it out... it's Halloween music with a Caribbean flair.

I believe that green guy is meant to represent a moldering Smurf corpse...

Nice story, Kirk. So is that your "one teacher who made a difference and changed your life forever"?

Hi, Kirk! I've stumbled into your wicked cool secret fun spot by happenstance, and I love it! Would it be okay for me to add a link to your blog from my blog???

todd- maybe the superman suit on the decoration inspired the real life ones that are padded. So ahead of it's time!

raggaexx- great idea! I added you to the list. (I'll be reposting the list every so often throughout the countdown too)

steven- You may be right, the sack looks like a smurf hat!

rozum- ha. it doesn't take much to impact my life.

sparkle- of course you can! Welcome to the party. I'll take a peek at your blog too if I ever get a moment.