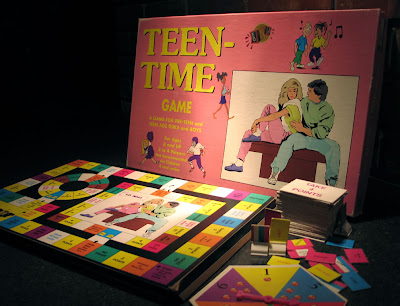 Teen-Time is a standard tabletop board game that is so phenomenally dismal in every respect that it deserves to be examined and perhaps even celebrated. This vexing plaything was produced by an outfit called Tee Pee Toys which is a division of the Jessup Paper Box company of Brookston, Indiana. From the moment you lift the lid you can practically hear dialogue from the boardroom brainstorm...

BOX EXEC #1: Gentlemen, we make boxes. Empty boxes. Board games are just boxes with a game inside, so why don't we whip up a game, throw it in the box and start pulling in some real moolah?"
BOX EXEC #2: But we don't know how to market games.
BOX EXEC #1: Let me ask you this...who buys games?
BOX EXEC #2: Kids. Wait, no... teenagers. My teenage daughter's always playing with some stupid game.
BOX EXEC #1: So we call it Teen-Time. It markets itself!

Teen-Time demonstrates a delightfully astonishing lack of understanding of its target market. Hilarious generalizations abound. The playing field centers around, where else, but a mall and a video store. But let's just cut right to the exquisite absurdity of Teen-Time... the object of the game is to get engaged to be married before your fellow teens do. Seriously. 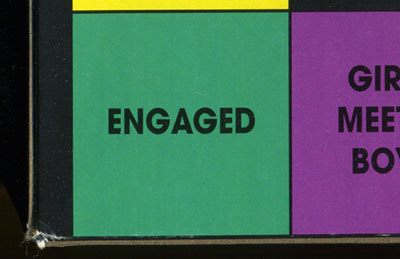 Each game piece graduates through a series of levels. Girl meets Boy, (or vice versa) Going Steady, and finally Engaged. It's hard to even speculate on the thought process that led to this creative decision. However, I have a strong hypothesis regarding the origins of the box art...

BOX EXEC #3: But sir, we don't have an art department. We'll need some sort of graphics for this game you speak of. The teens will demand graphics.
BOX EXEC #4: That sounds expensive.
BOX EXEC #1: Listen. Who needs some fancy-pants artist when we already got us a big ol' book of clip art. It's free and you don't even have to xerox it. There's a thing called a "see-dee rom" in a clear plastic flap inside the front cover.

Presenting the art of Teen-Time... 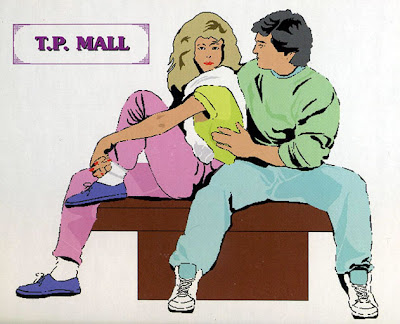 The official Teen-Time mascots are a handsome pair of "teenagers" who threw on their sweatsuits and headed to the mall to get engaged. Why is it called the T.P. mall? The game was made by Tee Pee Toys, remember? Those clever, self-referential dogs! I'll bet the teens eat that up.

You say your digital files aren't of adequate resolution to be printed? You think those punk teenagers care about crap like that? Just print the thing... 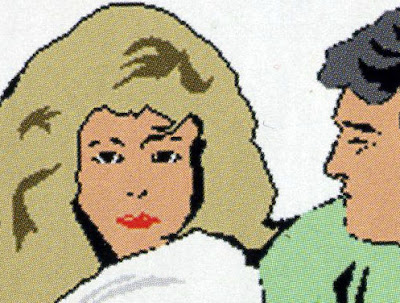 The Teen-Time box features a grab bag of clip art with styles ranging from junior high doodle-ish to early CorelDRAW... 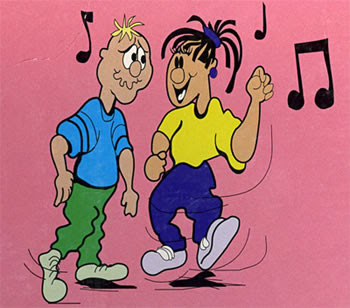 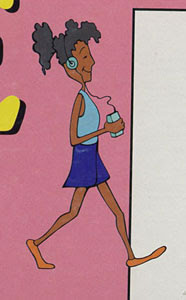 There's no copyright date on the box. I would have guessed the game came out in the 1980s but the '90s style gradients on these speakers threw me.. 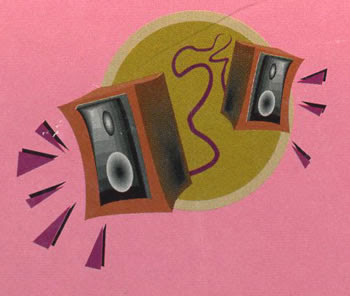 The game is intended for "Ages 8 and UP" and they don't recommend it for children 4 and under. So what about the 6 and 7-year-olds?

Perfectly mirroring real-life adolescence, the Teen-Time experience is wrought with twists and turns. Just about the time you take 4 points the girl lose 1 turn and next thing you know girl break up. Story of my life. 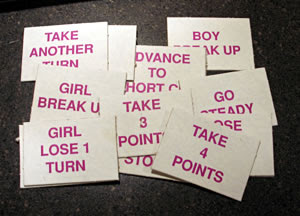 But if you really foul up then prepare to be banished to... the video store? 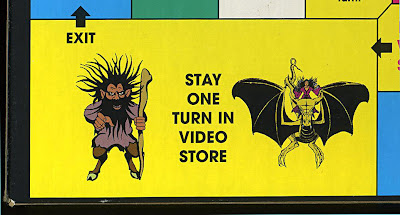 Video Store is to Teen-Time as Jail is to Monopoly. How can this be? I thought teens loved chillin' with a new release on a Friday night. Even more intriguing than this rule is the wonderfully baffling choice of visuals. (Didn't the clip art book have an illustration of a videocassette?) Perhaps the graphics reveal that the only remaining rentals are Troll on betamax and a bootleg copy of Heavy Metal. I suppose that would make for a good punishment.

But the coup de grâce is found shuffled among the usual assortment of directive cards... 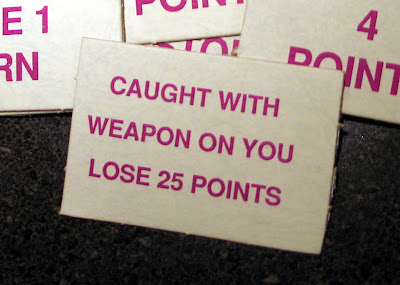 I assure you that the image above is genuine and presented without doctoring. Now, this is a game for 'ages 8 and up' about meeting your future teenage spouse at a shopping mall.. why is anyone packin' heat? This little doozy seems completely out of place next to the rest of the generic deck. None of the other cards even mention reasons for the point fluctuations and none of the others come close to such a drastic point loss. He who draws this card basically loses the game. I guess the execs at Tee Pee Toys wanted to send out a pretty strong message here. They're not as oblivious as you might think. They realize that teens are all "strapped" these days. But if you're sloppy enough to get caught with "weapon on you" then you absolutely deserve a trip to the video store. 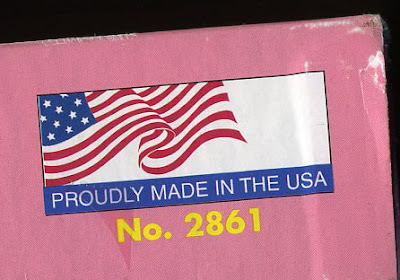 In closing, it's a pleasure to reflect on products like Teen-Time that have managed to squirm their way from the brains of undiscerning schemers into reality, seemingly unchallenged.
I like envisioning pallets stacked full of Teen-Time making their way through the capitalist system. A designer designed it, a printer printed it, a purchaser purchased it, a truck driver truck drove it to some retail wonderland where a clerk stocked the shelf with it. Finally a consumer (possibly a teen, more likely the grandmother of one) felt that this particular item would enhance life in some small way and they backed up their theory with US dollars. They were wrong.
But years later, thanks to the secondary market, my wife's understanding that Teen-Time's unintentional value outweighed the twenty-five cent price tag, and this electronic internetted article, there is new hope that the efforts behind Teen-Time may finally yield some manner of joy from the human race.
Posted by Kirk D. at 12:23 AM

I think you may have started the next great Internet Phenomenon. Copies on Ebay are about to skyrocket.

"Caught with a weapon on you?" I seriously thought that you had photoshopped that image until I gave it a closer look. I'm baffled, flabbergasted and I want 10 copies to give as gifts for Christmas.

You're right, the weapon card is totally real. (I just edited the article to include that point too)
I'm with you. I hope this becomes the next Magic the Gathering! Glad I could flabbergast you on this fine Friday.

This is too good.

Hilarious post, Kirk. Thanks for the laffs...and, as always, keep up the consistently stellar work.

Hello... Not sure why, but over the past month or so, every time I visit your blog, I am disapointed to see that I can't read it... For some reason the text on your blog is white, and your background is a very light colour, so its impossible to read ;-(

Thanks Joe!
And way to spell it laffs vs. laughs. Laffs if my preference too!

Ronn- I've had that issue with Safari ever since I started using the new blogger customization system. (I also can't figure out why 'add comment' is the same color as the background sometimes in all browsers) My grasp of html is so poor that I haven't had time to mess with it thus far, but I hope to when time gets less tight.
In the meantime I suggest using any other browser or the rss feed. But as a longtime safari user I want to make it right (plus the iphones will run safari and I don't want to leave the early adapters out of the secret fun.) Thanks!
kirk

Looking at all the images from that game really made my eyes hurt. It's so horrendous, I don't know if I could ever actually play it.

Somewhere in the storage space, I've got a couple of Tee Pee Toys games purchased in the early '90s, but clearly originally designed in the early- to mid-'60s that not only have a lot of weird type mismatch (hey...Helvetica always works, right?) going on, but also have black censor bars (only added to the black plate, so they don't even completely mask the original image) over cigars and pipes! As you can imagine, this is a bit disconcerting. I don't recall the prospect of weapons violations being a factor in game play, though.

Something tells me that Tee Pee didn't stay in business for very long.

Thanks for posting this, Kirk, and thanks to your wife for slapping down that quarter. Glad I'm not the only one who buys stuff like that at garage sales for the sheer laugh factor. Great post, as always!

Catching up on old posts....

In response to the final paragraph of the Teen Time post, I wanted to let you know that, thanks to you, Teen Time has most definitely yielded much joy to this member of the human race.

looks like I missed a bunch of comments on this one somehow.

Rozum- Yeah, I've never brought myself to actually try playing this. I should wait until my son is a teen and then attempt to play it with him and his friends. I'd be the lamest dad in the world.

Devlin- I shouldn't be amazed that you have more Tee Pee games, but I am. Their handling of the tobacco censorship is hilarious. Proves the sort of thinking that went on in that place.

cdp- Half of me hopes so, the other half not.

sweetheartville- You're very welcome. Garage sales and flea markets can certainly be comedy gold if you're with the right folks.

wendi- ha! Thanks. I can rest a little easier now, knowing that my mission was accomplished.

game looks spectacularly bad. so bad that it must be good. in fact, i'm on ebay right now looking for a copy.
Bam. not found on ebay but here instead -- http://www.boardgamegeek.com/boardgame/27497/the-teen-time-game.
Now I'm debating whether it's worth buying. but wait, there isn't one game available that i can find. which must mean this is the greatest most rarest game ever. i need it. thx for the recommend. funny post too btw.

Zach- Good luck on your search! It's only value is for mockery, so if you ever track it down make sure to have fun ridiculing it. Glad you enjoyed the post, thanks.