If the marketers that be have done their job then you're aware of the new Hairspray movie (a.k.a. the John Travolta in drag flick) that comes out next month. The upcoming film is based on the Broadway show that's based on the 1988 John Waters picture. One of the things that makes the original so enjoyable for me is the world that the story takes place in- 1962 Baltimore complete with record store, beatnik pad, carnival, and joke shop. Only problem is they never showed the inside of said joke shop. In a major tease of a moment a couple characters walk past the exterior, but that's the extent of it. Forget Oz or Tatooine, I've been longing for a film that will transport me to a 1960s novelty dealership. Well, thanks to the remake my dream will finally come true. It's confirmed that at least one scene takes place inside the store that's operated by Christopher Walken's character, the Hardy Har Hut... 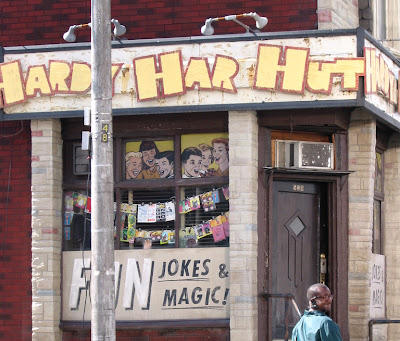 photo by Torontochub27
But this dream of mine has managed to span even further than that. Last year when the Hairspray production team set out to reconstruct a 1962 gag shop they approached the gag masters, S.S. Adams for consultation. They asked if there was any way they could get a look at some Adams products from the 1960s. The timing was beautiful because my book on the visual history of the company was just about to arrive from Korea. So first I was delighted to hear that they purchased several copies of the book for reference along with loads of Adams stuff to be used as set dressing. Then I was thrilled to learn that they decided that the Adams retro-styled packaging (which I designed) looked retro-ish enough to be used in the movie as is! (You can see a few packs in the window in the above photo.) But then they made another call and inquired about this illustration that I did for an Adams catalog cover... 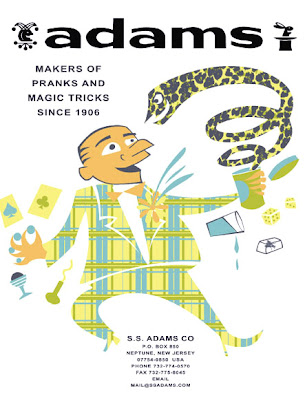 This little fellow was my attempt at what I thought it might look like if Jim Flora had illustrated a cover for '60s-era Esquire magazine if it had a feature on S.S. Adams. Turns out the Hairspray set builders thought that my prankster would make a good representation of Mr. Pinky, owner of Hefty's Hideaway! I agreed and the next thing I know he's hanging on a building in Toronto... 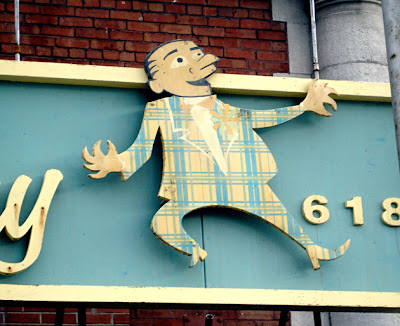 Here's a shot of the entire storefront... 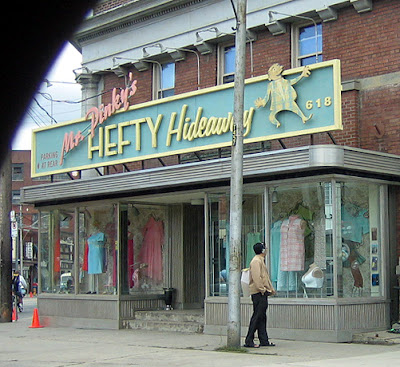 Who knows how many seconds of screen time he'll get, but I couldn't be happier with the way this has all unfolded or the way that Mr. Pinky turned out. Furthermore the overall art direction and set decoration is phenomenal. The level of detail and accuracy on both the interior and exterior sets is stunning and it's sad that only a fraction of it will be visible in the film. My mid-century geek heart is ignited by the following photos... 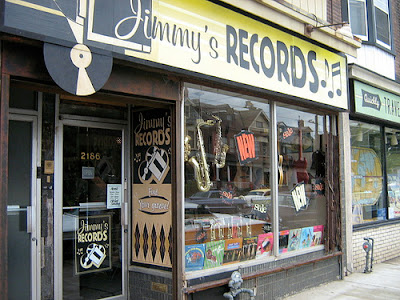 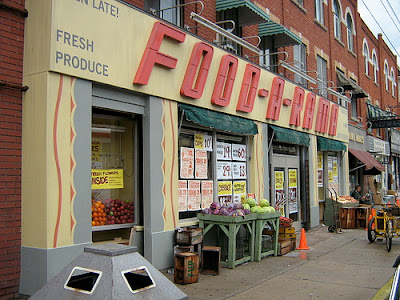 These were shot by The Dead Parrot 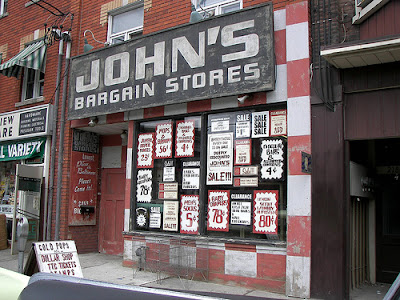 I'm guessing this is an homage to Mr. Waters? (Photo from this great set by BillP) 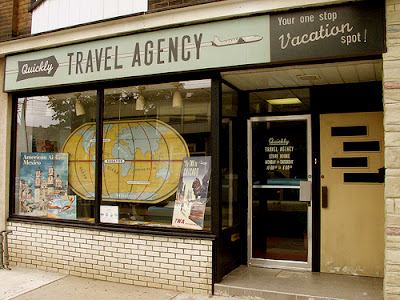 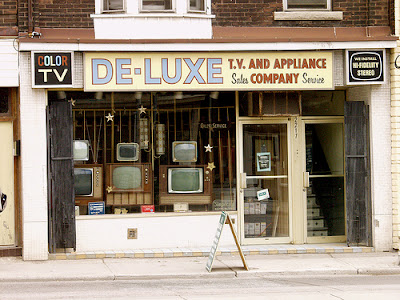 Those last two came from This wonderful set from Andreas Duess.
Makes me wish someone would create an entire community made up of homes and shopping districts with designs from the mid nineteenth century. If you build it, I will come.
Anyway, if you decide to go see Hairspray this summer feel free to stand and cheer when the Mr. Pinky sign hits the screen. You can go ahead and shout out my URL too, if you feel like it. I know I will.
Posted by Kirk D. at 9:00 PM

Email ThisBlogThis!Share to TwitterShare to FacebookShare to Pinterest
Labels: Design, My Projects, Pranks

Wow! This is amazing, Kirk! You must be so proud. I love the illustration (I'm a big Flora fan). Great job.

That is extra super cool! I hope the film makers hook you up with some sweet promotional items.

Heck, I hope they wrote you a nice check, to boot.

You've got to be one happy camper right now, and I just couldn't be happier for you. This is immortality, my friend!

argh, drool. man that set design is insane. And your work fits right in, m'boy, nice job. We need to trick a studio into decking out our town in that look and then conveniently never finish the movie.

Great work, Kirk! As one of the original old-school John Waters fans, I hope he get filthy-freaking-rich off this. They made great use of your gag-guy illo! Did any of these sets come from Vincent Peranio designs? About 15 years ago you could still find junky shops like this at Fells Point that sold gag gifts and such - those storefronts aren't too far off the mark...

Congrats Kirk! Now I'll have to see this movie and watch for your art. Will you get a screen credit or will there just be a thank you to S.S. Adams?

Wow, that is too cool for words! It'll be fun to keep an eye out for it during the movie! Congratulations!

Hey sorry for my delayed response to all of your kind comments. I've been on vacation (related posts soon to come). I hope you all will accept a blanket 'thank you' for your encouragement. I appreciate each comment.

To answer your questions..
Flamen- I don't know. I do know the set dresser this time around is Gordon Sim, who did the same on the movie Chicago.

Todd- I am supposed to get a credit, but I'm real curious if New Line followed through with that.

Congrats to you! Great job on all of that. I dig the background of your site as well, think I'll have a look around.

Thanks clicknathan!
By all means, explore. Also, I'm finally caught up on stuff so there will be more new posts coming soon.
Have fun!

Wow you have sone TALENTS! Very interesting to know that you done such an awesome job that i can never do! Haha!

There is a vintage record store in my town (Provincetown Cape Cod) that I think you will love. I'll try to take a photo of it and post it here for you.

Bellamy-
Sounds great! I'd love to see it.