TWELVE YEARS OF CHRISTMAS: YEAR ONE

If you think about it, we humans really only get about nine or ten optimal childhood Christmases. You hardly know what's going on when you're one and two years old, so it doesn't really kick in until age three (if you're lucky). On the upper end Christmas starts feeling sort of different as early as age eleven. And by twelve if you find toys under the tree you'd best keep your mouth shut about them on the day you return to school. Ten Christmases isn't much. So if you get the flu one year and the next year burglars steal your presents (like they did on that episode of Growing Pains) then you're looking at a loss of roughly one fifth of your Childhood Christmas Wonder.
Thankfully, I grew up with every ounce of potential Christmas joy intact. For me it was just as Jean Shepherd put it in A Christmas Story, it was "Lovely, glorious, beautiful Christmas.. around which the entire kid year revolved." So I thought I'd showcase my own collection of childhood Christmases over the next twelve posts, one photo from each year spanning from 1973 to 1984. 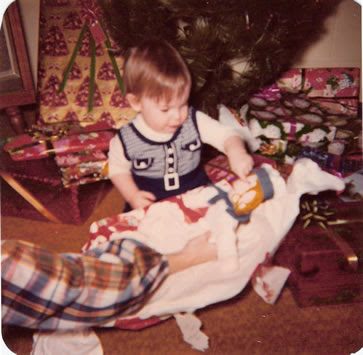 1973
I was only eleven months old, but I could poke a doll in the eye with the best of 'em. As you would expect, there's little for me to reminisce about regarding that year. I do know that the doll was handmade by my great grandmother. It was a Kirk Doll, which is to say it was a doll made in my likeness, yet sewn without any visual reference. And it wore a sailor suit. Life is full of concepts that are difficult to learn, but I can't imagine what takes place in the mind of a child when a parent holds up a rag doll wearing Naval garb and says repeatedly "This is you."
Posted by Kirk D. at 7:06 PM

Email ThisBlogThis!Share to TwitterShare to FacebookShare to Pinterest
Labels: 12 Years of Christmas, Memories

The whole "without reference" thing is a mystery to me. My parents did something similar. They had a portrait of me done at some art fair when I was a baby of what I would be like when I was three or four. So as I rolled around my crib at home with some baby sitter, some dude who never even took one gander at me at an art fair painted a picture of a toddler (with head turned away from viewer) stuffing grass down his diaper.

I have to assume he did the same image for hundreds of people, only varing the shirt, hair and BG colors, then quicky jotted the kids name by his signature. I hope he had a different image for any girl's portraits...