Jerry Seinfeld has a bit about weddings in which he says "Nobody wants to go to your wedding. ...they open the invitation and say "Oh jeez- it's on a Saturday!" That sums it up for me now, and I certainly felt that way when I was a kid. One of my childhood weekends was almost ruined by my uncle's wedding...almost.

My family pulled into our motel in Oklahoma City where I was delighted to discover that we were within walking distance of Frontier City, a Western-themed amusement park. Sensing my plan, my parents quickly reminded me that there would be no time for fun on this trip. We would make another trip for such frivolity "someday." (I've still never been.) So I was confronted by the park's inviting, Alamo-style gateway every time we entered or left our room. It created a series of painful reminders of the weekend's unmet potential. 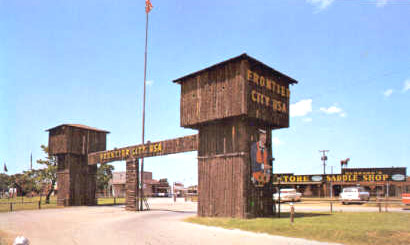 After a day of being dragged around the hot city, I sat at our rehearsal dinner table feeling bored and glum. My wandering mind remembered an unusual looking vending machine that I'd glimpsed earlier in a passageway off the motel lobby. I was granted permission to investigate. The low lit lobby was a peaceful retreat with cool brick floors and plastic tropical plants. I quickly located the mechanical diversion. Its appearance was not unlike a super-sized cigarette machine. Internal fluorescent lights illuminated its wide variety of wares. The top row contained toothbrushes, toiletries, and sewing kits. But by the third row down the selection was made up of fewer necessities and an increasing number of luxuries. Even I knew that most travelers could do without playing cards and key chains. Then as my eyes moved lower still, the choices turned from necessity to luxury to my very favorite... novelty. I saw twisty metal puzzles, magnetic dogs, and lo and behold, a selection labeled "pranks and magic tricks!"
Prior to this, my experience with real live Pranks and Magic had been limited to a glorious Snake Nut Can from a local, short-lived novelty shop. This machine seemed to offer the same goods that were peddled in the back of my comic books. Getting my hands on that junk would become one of the prevalent themes of my life.

Pocket check...I had enough change for two! I stood my quarters side by side in the metal coin-taker. A labored thrust caused a small, colorful box to fall into the bin near my knees. 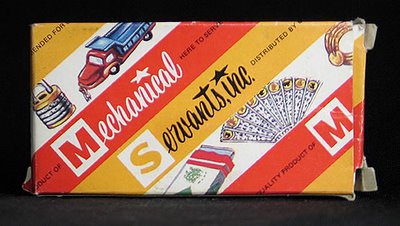 I tore it open and found plastic "biscuits." 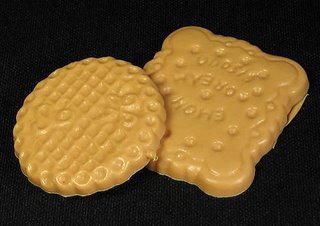 I was confused. These seemed less like a prank and more like the "play food" my little sister had back home in her play kitchen. There's no universal biscuit shape, so how would one ever locate real biscuits to match these? This joke was far from "practical." Regardless, I had fifty more cents. The identical box popped out. "A duplicate? So soon?." Actually the box was the same but this one contained a Palpitator also known as a "plate lifter," an odd looking doodad with a rubber bulb that inflates a small bladder. 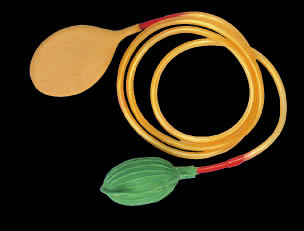 What luck! A "table gag!" And there I was on my way back to a banquet. Five minutes later my mom's plate was dancing. And her reaction..satisfying. I craved more.

Between my father's pocket change and my mom's bottomless purse, I was able to return to the table with a tall, precarious stack of flat boxes. The remainder of the meal was barely long enough for me to open and familiarize myself with each of my newfound tricks... 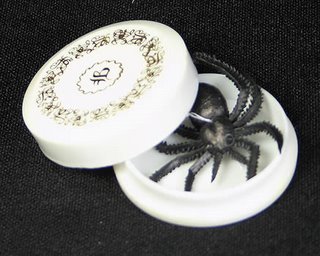 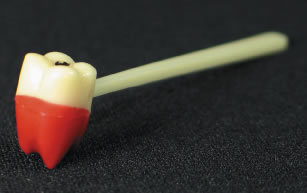 Some, like the Compact and Bug and the Trick Toothpick would prove to be highly effective in future months.

Yes, there were duplicates... 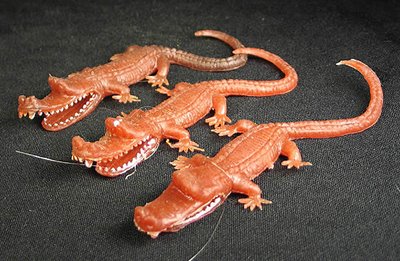 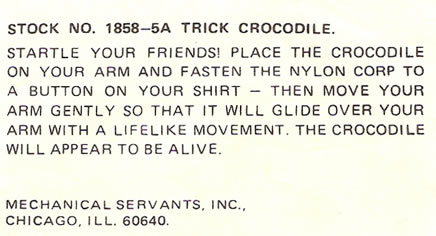 By the end of my spree, I had nearly enough biscuits to pull off the gag.

Naturally, the morning of the wedding was stressful and hectic. I thought that surely everyone could use a good chuckle right about then. My mother was set to sing a solo in her brother's wedding. In fact, her procrastinative nature had turned our four hour road trip into an extended rehearsal. As I sat in our room mentally selecting the perfect ruse, I beheld an audio cassette that contained mom's backup music which laid on the desk next to the motel television. I plucked the Trick Suction Cup from my arsenal and adhered the plastic tape case to the motel furniture. About an hour later, long after I'd forgotten my own trap I heard my mother raging. "Alright, someone spilled something sticky all over my tape! If this tape is ruined then..." my joke was discovered, and I had a well-earned laugh. 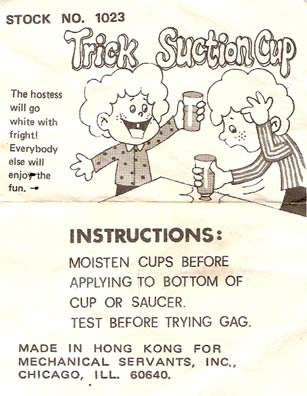 The wedding ceremony was no longer a burden to me, but an opportunity to study my deceptive devices and patiently panhandle from my many relatives. Finally, once back at the inn, I raced to my personal coin-op curiosity shop with heavy pockets. By this point I was no longer savoring each new acquisition, I was on the mental level of a slot machine junkie. After three fresh boxes a red light turned on. "Sold Out."

I stood shocked and waiting for a wave of sadness to hit, but it never came. Instead I felt relief. I had already been dreading my departure with my Mechanical Servant. I had already wondered how I would be able to leave its mysteries within. Now I didn't have to, I'd solved them all at fifty cents apiece. 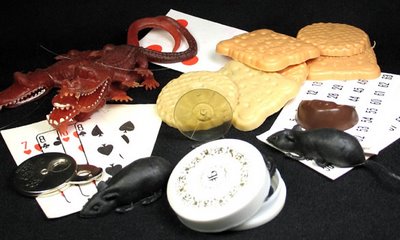 The present day remains of the Oklahoma City bounty.

I am responding to a comment in a blog.

I stumbled across your website while doing research for a film I'm working on. I was wondering where I could find files of the children in costume in the "Spooky" section of your secretfunspot.com? I'd love to be able to print those out to have as references for our wardrobe department.

Sorry if this isn't appropriate for a blog post, but I couldnt figure out any other way to get a hold of you.

hi!I have put an a post in my blog on you, i love the retro world

Hi Kyle,
I'll send you an email, so watch your inbox.

Hey Popthings,
Thanks for the link! You've got some great images on your blog, and very cool subject matter. I'll be watching it.

Hi Kirk!
These remind me of the vending machines which were always located right outside the restrooms at Stuckey's. I used to save my change so I could get the various novelties which they contained. Shrunken heads, tricky dogs, rubber tire compasses were just a few of the ones that I recall.

Oh, man, a novelty machine in a Stuckey's.. sounds like a little slice of paradise!

The plate lifter looks like some Viagraesqe device that you would see advertised on QVC very late at night.

Yeah, that image is from a postcard from the 1950s. It was pretty different when I first saw it, but I remember the gateway. Still need to check that place out.

I predict a visit to frontier city, say 9-10 years from now, when you can take the little one with you on all the rides....

I agree, that seems to be the only way to right this wrong of my childhood.

Stuckey's has soooo much cool stuff. It's like a little dream store. I linked this post at Slice.

Beautiful story.. too bad you didn`t save at least one unopened package, love the layout! I know that`s an unreasonable idea for a young kid.....lol. My niece`s little boy can`t undestand why I have all these unopened diecast cars and action figures!
I also remember the cylindrical combination locks that are pictured on the package!! And that toothpick is to die for!!!

Yeah, an unopened package would have driven me insane by now. It actually a little scary how young I was when I started leaving stuff 'mint in box.'

I recently picked up a Travelers Valet by Mechanical Servants at an auction. It's a real hoot! I can't believe that you still have some of the booty. Color me jealous.

Thanks for the interesting post. I remember Mechanical Servant vending machines in hotels when I was a kid, loved them. Kids and wedding don't mix but glad you got some cool stuff.

I'd love to see a photo of your Travelers Valet. Used to love seeing them in the Jersey Turnpike rest stops back in the 70's-80's.

I bought a few of these off ebay, the ones in the white boxes. What year do you think their from? This place is not in business anymore are they? What year did they close? If anyone has any crisp dead mint boxed vintage ones especially, the one with the biscuits, I'll pay you TOP dollar and beyond. Anyone out there please let me know. Thanks.