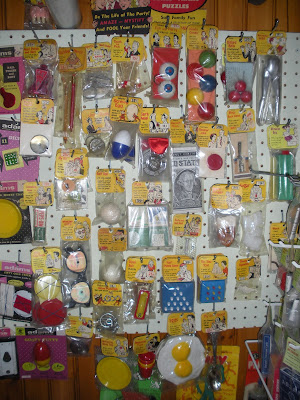 Throughout my years as a collector and advocate of S.S. Adams novelty items I've encountered a number of fellow enthusiasts, and I've noticed that most of them focus on the magic side of the product line. This stands to reason considering the thriving magic community made up of professionals and hobbyists alike.

To the contrary, a society of pranksters is difficult to achieve; too many trust issues, and meetings would be constantly interrupted. Plus it's nearly impossible to be a pro jokester, unless you've got your own TV or radio show.
So when longtime Adams connoisseur Randy Garner shared photos of his vast collection with me I was delighted to find that it is decidedly prank-centric. It's also one of the largest and most exhaustive assemblages of Adams goods that I have ever seen. There are some pieces that I was previously unaware of that I wish I would have known about when I was putting together the Life of the Party book.

Behold a world class Adams spread... (for added pleasure all the photos get very large when you click them.) 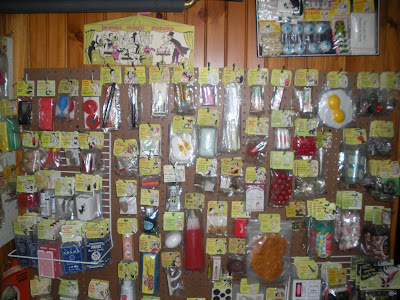 The largest selection of self-serve paks I've ever witnessed
Regarding the origin of his obsession Randy says, "I'm one of the many folks who got started with Adams ala Johnson Smith Company, with an order around 1967 for a plastic hot dog and a rubber chocolate, which, including the 25 cent postage fee, cost a whopping 60 cents." 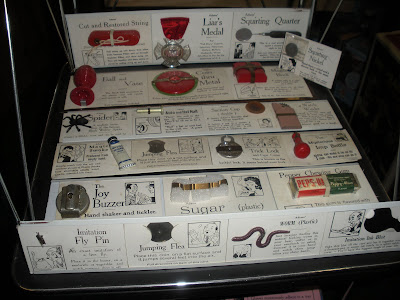 Prducts from the first half of the 20th century

As he got older he started buying in bulk which eventually blossomed into the Garner Novelty Company that he and his wife ran for ten years in the 1990s. (I actually recall ordering a shipment from Garner soon after I got hooked up to the internet.)

Garner Novelty got 98% of its business from an ad in Boys Life Magazine. Randy explains, "Ninety percent of what we sold came from Adams, and I used to buy some things bulk from Bud Adams, and package them myself in Self Service packaging (after Adams went mostly to stretch pack) using the old headers that I bought from Adams." 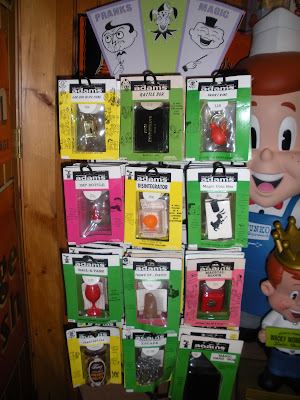 Stretch Paks circa 1960s (sharing the corner with Freddy FunKo) 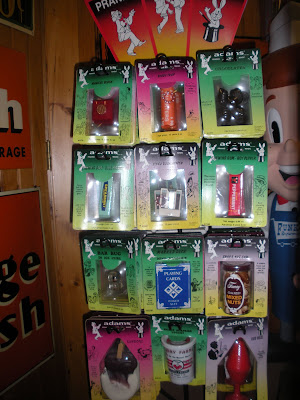 Randy goes on, "I used to make an annual trip to the factory, staying in Ocean Grove, and became good friends with Chris, Bud and Hilda [Adams]. I accumulated a lot of my collection by rummaging around in the warehouse on my visits in the 90s, and on ebay since." 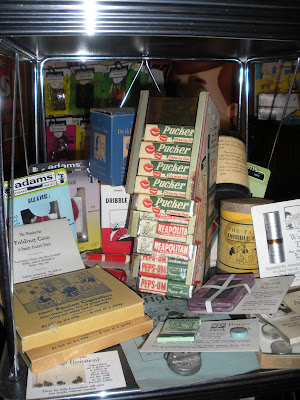 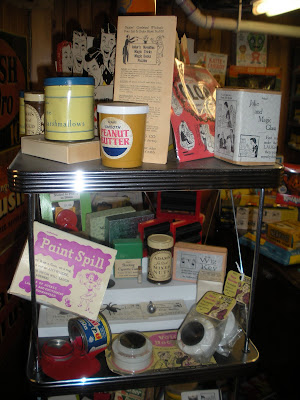 This display features the scarce Paint Spill and Voice Recorder 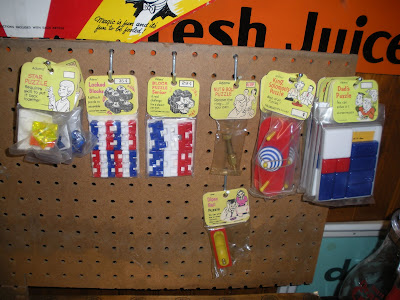 Puzzles in self service paks 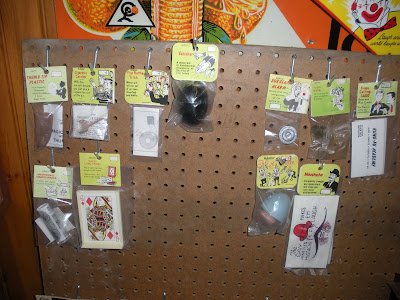 Some magic tricks and a few miscellaneous novelties 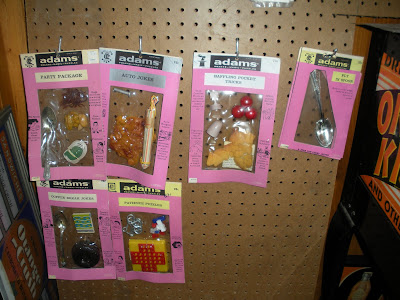 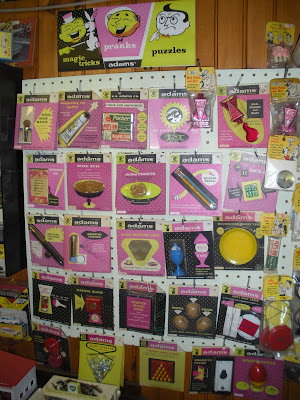 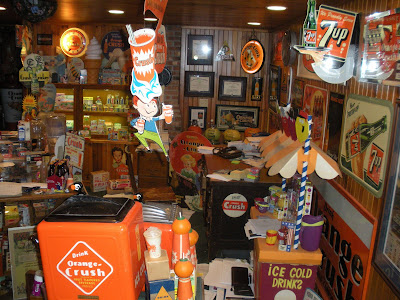 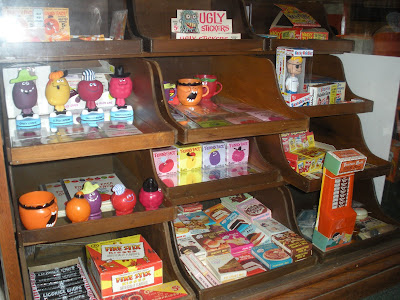 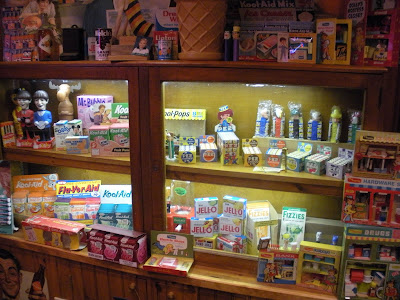 Thanks Randy for treating us with your treasures!
Posted by Kirk D. at 12:43 PM

Randy was our favorite customer ever at S.S. Adams. He would visit, pick and pack his own orders and everyone in the factory new and like him. He was one of a few business that catered to children and got paid by envelopes full of loose change, and yet he always shipped their orders out promptly, answered their letters and treated them with respect.

I had a bunch of SS Adams stuff when I was a kid. I loved it too. The packaging never seemed to be updated. Very cool.

Wow that collection is impressive. I would love to see it in person.

That's something what i can call more than a collection, it's the work of a life :)

Very impressive collection! Makes me want to dig around my basement and find my old boxes full of magic stuff. I bought a lot of the SS Adams stuff and always kept the packaging - loved it as a kid and still do now as an adult!

Does anyone know what year Adam's came out with those "Life of The Party" box assortment sets?

Prankman- There's no year on the LOTP box (or inside). There is a rack header that came out roughly around the time of the LOTP kit that is dated 1957. I don't have proof of an exact year though.

So, it's definitely a vintage piece. Nothing from the 80's and up?

Also, are they pretty rare of an Adam's item, The Life of The Party sets? I bought 3 copies of the "Life of The Party" hardcover book. The "Bible" guide to Adam's stuff ! WOOT! Can't wait to get it. Also bought "Mail Order Mysteries", and "Cheap Laffs: The Art of The Novelty Item."

They did magic sets in the 80s, but I don't know of any boxed prank sets. All the pranks in the LOTP set are definitely 50s or earlier.

I see, but are they hard to come by dead mint and sealed?

I haven't shopped for the LOTP set for years so I don't know about current rarity. They're certainly not common, but there were a lot that survived in warehouses, although I don't know how often they go up for sale.
Thanks for buying my books! I hope you enjoy them for years to come.

No problem. I'm actually going to buy 3 more copies. I'm a huge Adam's fan and collector. One last question. When did Adam's actually go out of business? I understand around 2009 or so Bud Adams sold the Adam's rights to a company called Magic Makers/ Martinka Magic. I know they do reissued classic pieces. Myself, I only buy vintage.

I heard S.S. Adam's went out of business around 10 years ago, is this true? Also, I have a dribble glass and it has www.adams.com on it. So, Adam's I'd surmise got into internet sales for some period of time before they closed, correct? Or is a piece with www.adams.com not a real Adam's factory piece?

Anything with the Magic Makers name is definitely repros, correct? Thanks so much for your time Kirk.

From what I understand, Magic Makers took over production, and also acquired the original machines that made and packaged all the American-made items. (I'm not sure if they use the same sources for stuff made overseas.)

They also got most of the existing stock from the Adams warehouse So whether or not MM product is considered repros/reissues depends on how you define the term. 'Post-New Jersey' or 'Magic Makers era' might be more accurate. Like you said, that happened in 2009, and about that time is when the NJ plant was vacated. (I have no idea if any of the NJ employees continued under MM) Adams products have never stopped being produced, so they only technically went 'out of business' if you count the shift to MM.

NJ Adams products did have the web address on them for a number of years. Adams has outsourced at least some of their products since as far back as the 1930s. By the late 1900s it was much more.

Thanks so much for the information Kirk.

Does anyone know how I can get in touch with Chris Adams? Is he even still alive? I know Bud unfortunately passed away. I know Chris had a piano store (Monmouth Piano) in Neptune, New Jersey, but I believe it's no longer in business. I called the number and it's out of service. I myself live in central New Jersey. Asbury Park and Neptune, NJ are pretty close to me by drive. If anyone can provide some advice I would appreciate it. Thank you.

Prankman, you're welcome to email me directly at kirkd @ centurytel dot net. It's my preferred form of communication.
KD

Hello, I recently stumbled across this SS Adams nite lite set. It's a2081. Two separate plug in lights. Unopened but rough stretch pal. Any info on this product would be appreciated. Ty john.
Johntaxmancount@aol.com