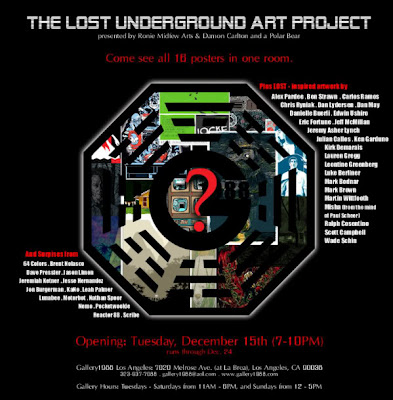 Hey folks, I contributed a piece to the LOST underground art show that debuts December 15th at Gallery 1988 in LA! I should clarify, the show's not about underground art that has been lost somehow, it's in celebration of the awesome TV show from J.J. Abrams and his crew. It's officially authorized by Bad Robot and ABC TV and everything.

The show will feature the original LOST-inspired work of over 25 artists as well as the sixteen prints that have been slowly revealed for the past five months on Paul Scheer's Damon, Carlton and A Polar Bear site. There will be "many surprises" too!

I will share my contribution here as soon as the standard veil of secrecy can be lifted. If my van stays intact I will be attending the opening of the show on Tuesday evening. So if you come please shout my name repeatedly until I find you. If I don't show then check the Golden Apple comic book shop next door to the gallery.

Look here for more info about the show.
Posted by Kirk D. at 1:57 PM

Lost and Secret Fun Spot combo? Who would have ever guessed it? Not me Awesome!

I can't wait to see your contribution.