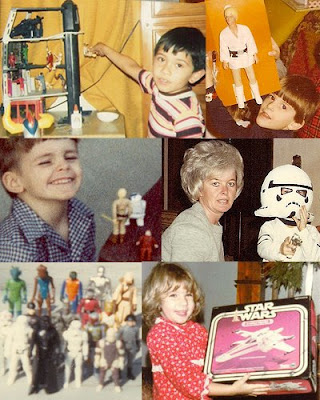 I'd like to point you towards the amazing Growing Up Star Wars Flickr group, which has the power to make many of you extremely happy. It's lovingly managed by Todd Fraklin, mayor of Neatocoolville and Glen Mullaly.

Proud Hollywood geek Wil Wheaton just blogged about the photo collection which has caused an explosion of contributions. I'm proud to say that he featured one of my own submissions... 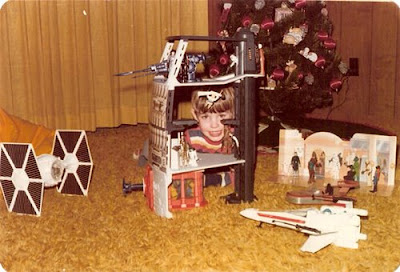 About which Wil says...
"The gold shag carpet, the wood paneling on the wall, the heavy curtains, and the Death Star playset that he didn't need to trade for the landspeeder because he already had it … how many other kids had precisely this Christmas morning in 1978? (Take a look at Christmas 1981 if you really want to envy this kid.)"

In truth I didn't receive all of that stuff in one morning. After I opened the Death Star (aka my "big gift" of that year) I ran back to my room and fetched the rest of my collection which had taken months worth of special occasions to acquire.

The Wheaton connection is a fun coincidence because I met him in person several months ago. Here's hoping that I meet additional Stand By Me cast members in 2009; Corey Feldman seems like the next logical step.
Posted by Kirk D. at 12:07 AM

Email ThisBlogThis!Share to TwitterShare to FacebookShare to Pinterest
Labels: Memories

Wow, this looks fantastic! My heart's a meltin.'

My Dad found a "used" Death Star playset in about 1980 in an old house he was working on. It was missing the trash compactor, and a bunch of other parts, but we still played with it like it was brand new.

Yeah, that death star playset was the ultimate. I especially loved that cannon. I still remember the commercial!

Back in '77, I was one of the original Test Market kids for the Star Wars prototype toys. There was a promotional person in the movie theatre lobby interviewing kids as they went into see the movie. They took our name and assigned us a date and time to show up at a booth in a mall.

A week later (after my mother had bought me every tabloid featuring about Star Wars to study) I showed up, answered a lot of questions about the movie, who and what I liked and so on. Then I was show a video of upcoming commercials featuring the original Star Wars figures, ships and toy sets.

And like any good little consumer, I nodded my head and gleefully said "Yes!" to the question, "Would you want your mom and dad to buy these for you to play with?"

So, the whole toy thing, it's partially my fault.

The Death Star playset is truly amazing. Kids who got that were on a totally different level.