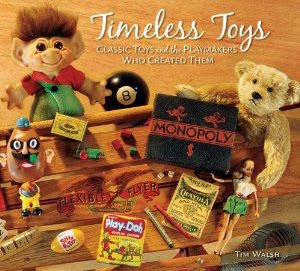 When I want to know something about classic playthings I consult my copy of Timeless Toys by Tim Walsh. Then I might have a look online for additional scraps of information. Tim's tome is that comprehensive. His follow-up was the definitive look at the Wham-O toy company in which he assembled an impossible amassment of photos and history.

For his most recent endeavor, a film called Toyland, Mr. Walsh teamed up with documentarian Ken Sons to capture a collection of classic toy stories, and offer a look into the modern toy industry. 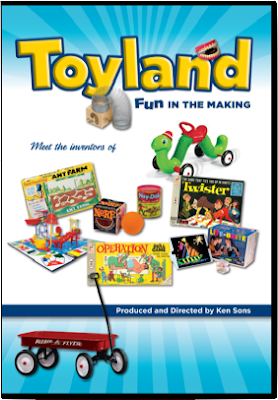 Toyland offers a series of exclusive interviews with toy experts and the inventors of some of America's most legendary playthings including Play-Doh, Slinky, Nerf and the game of Operation. Seeing these faces for the first time was a strange experience. These people have impacted our culture far beyond most any modern celebrity and yet they've remained unknown for decades. Sounds like a pretty sweet setup, actually.

Witnessing the personalities and hearing the anecdotes behind the plastic was a joy for me. I finally got to put a face on Uncle Milton, inventor of the Ant Farm and a slew of other mail order trinkets that I so cherish. And I was delighted that they included a segment dedicated to toy legend Marvin Glass. (I've since suggested to Mr. Walsh that Mr. Glass is ripe for his own documentary.)

Walsh also happens to be a successful fun-maker in his own right. He invented the game Blurt! and co-created Tribond. Toyland devotes roughly half of its run time to Walsh's recent quest to usher his latest toy concept onto store shelves. Following Walsh's mission to bring his dream to life is engaging in its own way. Whether or not you believe in his idea, his devotion is inspiring and the backstage glimpse into the toy world is fascinating. I felt genuinely nervous as he walked into pitch meetings, and I was reminded that sometimes the toughest part of the creative process is getting others to share your vision.

While the production value is not slick, Toyland delivers the goods, and I kept being thankful that the filmmakers put forth so much effort to immortalize this rarely seen facet of American history. (And there's vintage toy commercials and factory footage of toys and games on the assembly line!) If you're on this site you're probably into this stuff. If you're into this stuff then I'll bet my vintage Ant Farm that you'll like it.

Toyland is available on DVD or on Video on Demand.

Email ThisBlogThis!Share to TwitterShare to FacebookShare to Pinterest
Labels: Toys

I love this book! I've exchanged a few emails with Tim as well & he's a great guy.
Kirk - did you know that he's coming to Hot Springs for the film festival?