FOOT: PHANTOM OF THE FOREST AT SAN DIEGO COMIC CON 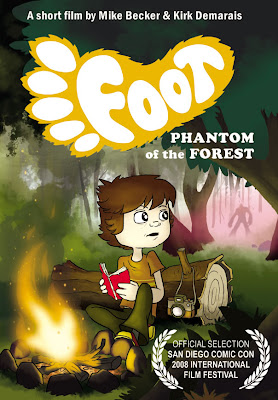 It's my pleasure to announce my latest project... Foot: Phantom of the Forest, a brand new animated short film that FunKo founder Mike Becker and I have been kicking around for nearly four years. Today we were thrilled to learn that it will make its world premiere next month at the 2008 San Diego Comic Con International Independent Film Festival!

Foot is about Monty, a 10-year-old boy living in the 1970s at the height of America's fascination with Bigfoot and other unexplained phenomena. When he learns that his recently deceased father was on the trail of the "Phantom of the Forest," Monty finds himself on a quest leading deep into the mysterious woodlands of Washington state. Our tale was given lush, beautiful life by the now-weary hands of Vance Reeser. (Check out this example of his eye-massaging work; and here's another one.) Jamey Clayberg contributed the eerie-licous original soundtrack, and Mike Becker and I co-wrote and co-directed.

The project went through many transitions before finally taking its current shape, but our goal has remained the same since day one; we wanted to end up with a story that's loaded with heart, and seasoned with our mutual appreciation for old school aesthetics— a film that would seem almost entirely out of place in today's film festival scene.

But easily as exciting as the Comic Con news is the fact that we've teamed up with FunKo to release the first ever Bigfoot Wacky Wobbler! The DVD and a wobbler inspired by the titular character will be sold together in a combo pack. The Foot design is a combined effort from both Vance Reeser and Rob Schwartz, the veteran FunKo artist and all-around cool guy who's been blessing the world with his wobbler-craft for nearly a decade.

Needless to say, I'm reaching hazardous levels of excitement over here. I'm planning to attend the screening as well as a signing event with Mike Becker and co. at the FunKo booth. I'll be posting the schedule (and eventually some images) here at the Fun Blog. So until next time, Keep on Footin'!
Posted by Kirk D. at 12:00 AM

Congratulations! It'll be great to see!

super cool. my booth is directly next to the Funko booth this year so we will have plenty of time to hang out

Very cool, indeed. Maybe it'll make its way down to the Enzian so I can see it too?

that's awesome that it's going to be at comic con. also, i think you should know that TRON is one of my favorite movies of all time, and i saw your old childhood drawings.

what a feat, can't wait to see it!

Ah the wait is finally over! Love the logo and I can’t wait to see this film! Best of luck at the Film Festival - I wish I could be there. Also, I just checked out Vance Reeser’s work on his site and blog and wow it looks like he was the right person for the job.

That is so--and I use this word advisedly--AWESOME!!

Good luck at the film festival!!

hola KIRKLE!!! hey I'll just continue to search youtube for a clip......i look forward to hearing all about it, I'm serious.
also missing you and your fam. take care and kick A with the new flick bud. ha, later.

Can't wait to pick up a copy, this looks like so much fun. Good luck at the con btw...

Brian O.- Vance is putting together a trailer, so stay tuned.

dan- well, at least I got to see you for about a minute, although I was hoping for a lot more. I hope your con went great, you were busy every time I looked at you.

cjd- wow, that place looks cool. We are going to start putting it in festivals so it could actually wind up in FLA.

todd- that logo was designed by Rob Schwartz of Funko and he can do no wrong in my eyes. and Vance's work is what makes the whole thing worthwhile.

vintage reader- ha, thanks. And I was surprised at how many big names threw the word 'awesome' around at the convention. It almost seems to be in vogue again.

dean- hey, when you get back we'll give you a personal screening. be well!

shawn- thanks on a stick!

thanks mick, Hopefully it we'll get our stuff together soon and make it available already!