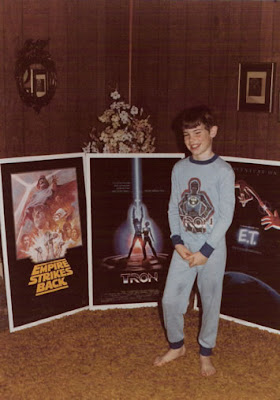 1982
My sister and I were forced to wait in the hallway as my mom sat in the living room and struggled to load the camera. It was taking forever and I kept threatening to peek around the corner to get a look at the Christmas spread. My mom's fumbling took too long and I secretly made good on my threat by popping my head out for literally a split second.
"What did you see?" my sister asked.
"I don't know." was all I could say because I truly did not know what I had just witnessed. It was like the living room had a new wall and my favorite movies were on it. Once we got permission to advance it still took me a minute to understand what I was staring at. Oh, they were movie posters like the ones at the theater! The fact that they were mounted and could therefore stand on their own had thrown me. They had looked so much smaller when they hung outside of the cinema. These had swallowed the living room! And they were glorious.
The Empire one had belonged to me prior to Christmas because I'd gotten it for signing up with the Star Wars Fan Club. However, I had only been allowed to unroll it a couple times.
Interestingly, a few days before Christmas I recounted a dream to my dad in which my parents had re-gifted me something that I already owned. Obviously, the force was strong with me.
The other two posters were obtained from the local movie theater. My folks just asked and they handed them over free of charge. (They actually got three there. I would receive The Dark Crystal a month later on my birthday.)
These masterworks have followed me around all my life, and they've just gotten cooler with age.
Boy, am I glad my folks decided to ignore my Christmas list that year.
Posted by Kirk D. at 10:22 PM

Email ThisBlogThis!Share to TwitterShare to FacebookShare to Pinterest
Labels: 12 Years of Christmas, Memories

That is pretty cool. The favorite part of working at a grocery store in the mid 90's was when I got to run the Video Rental desk. My store never hung the promo posters up (no room) so every week I'd get a huge 20lb box of posters and any cardboard standee that came in. Many apartment have had movie poster wall paper (including the ceiling.)

Love goes out to parents who give movie posters as gifts. My parents gave me the 1982 re-release Star Wars poster for Christmas. The cool part is that its from our local cinema that is now gone. Dig the Tron jammies!

smurf- that's one of the best fringe benifits I've ever heard of. By the time I got older and started asking for more posters at the movies/video stores everyone in town had become privy to the freebies so they started drawing names and stuff like that and it became a big hassle.

todd- that's an awesome gift as well. I bought a repro of that poster when I was a teenager.

Can I buy the ET poster from you? Just kidding. Great photos with a nice brown tint.

mystro-
Ah, you can't beat the brown tint. What will happen when old photos don't look like old photos anymore? It will be weird.

BTW If you're really looking for an E.T. poster I see a bunch on ebay that are relatively cheap.

I love old faded photos. You might see a few photos of mine taken recently on my blog looking faded.
Thanks for the ebay tip and your stories are great.